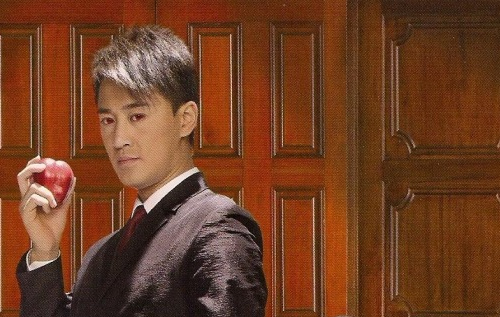 Whether Raymond Lam could fight and eventually oust Laughing Gor Michael Tse (謝天華) from the TV King throne, relies heavily on his acting performance in “Men With No Shadows”.

Raymond has two drama series broadcasting this year. The first drama series was The Colorful World of Sister Fa《花花世界花家姐》with Charmaine Sheh (佘詩曼) however the reviews received were only of average. To make matters worse, Raymond was also plagued with the “Pan Shuang Shuang (潘霜霜)” scandal early this year, thus causing his vitality to fall short below expectations.

However, all was not lost as Raymond still has a final shot at the TV King award based on his second drama, “Men With No Shadows”.

In the drama, Raymond would be acting as a unfathomable devil and using his skills as “King of Chok”, Raymond was expected to captivate and electrify the audience with those “devilish red eyes”.

Furthermore, coupled with his alluringly cool image in the show,  it was rather obvious why Raymond’s appearance in “Men With No Shadows” was promised to be an eye-catching one. The producer of “Men With No Shadows”, Poon Ka Tak (潘嘉德) also strongly supported Raymond and praised that Raymond definitely had the capability to be crowned TV King.

Poon Ka Tak explained, “Raymond’s performance this time ’round is completely different from the past roles that he had acted in. His role as Tai Fung [Raymond’s role in “Men With No Shadows”] is nothing like the usual Raymond Lam and his character will undergo monumental changes such that he is mysterious and unfathomable.”

Poon Ka Tak continued, “Raymond is very talented in terms of acting performances and this drama enables him to make full use of his acting skills. But of course, “Men With No Shadows” has many other good actors too. If not for Bobby’s convincing turn in his role as a good man, the audience wouldn’t be as taken in and it also helps that Tavia is caught in between Bobby and Raymond as it serves as a subtle chemical reaction.”

A different type of drama genre which is impressive and unconstrained

Although the genre of “Men With No Shadows” was introduced as a suspense drama, producer Poon Ka Tak continued to add on more details, “This is a different genre of drama and it can also be a fable tale. I want to remind the audience that this isn’t a story written based on real-life events happening in the society. Instead it is a suspense-filled and imaginary drama.”

“When we created this drama, it was in an unconstrained atmosphere hence I hope that when the audience watch and enjoy it, they would immerse themselves into the drama and wouldn’t keep questioning and doubting whether this was possible in real life. If they feel that Raymond is a ghost then he is a ghost, if they feel that Raymond is a human then he is a human. Shall keep you guys in suspense but I can safely reveal that the ending would be an unexpected one.”

Poon Ka Tak described “Men With No Shadows” as revolving around  two words, which was “Trial of Temptation” (試煉). When a person who seems like a 100% good man or woman in other people’s eyes undergoes a trial of temptation, the result is that actually a good person has his or her own weakness too. You feel that a devil is scary? Actually the devil in your own heart is even harder to resist! Many a times, temptations are from the true nature of a person. In a nutshell, I’m just going to say a cliché phrase of “cherishing the person in front of you” but how many people truly know to cherish the things around them?”

*Spoiler for “Men With No Shadows” ahead*

Dr O. Kong Tung Kin is a drug research doctor who is recognized and appreciated by the medical industry. Obsessed with researching medicine to help patients, Tung Kin is publicly known to be a good and great man. Tung Kin successfully invented a drug to cure cancer but was forced to leave the pharmaceutical company due to a medical drug trial scandal.

Tung Kin then set up his own practice and became a medical practitioner. Tung Kin has romantic feelings for Sau Fong but while expressing his love for her, he ran into an accident and hovered around the edge of death. The devil lists out conditions in exchange for his life and Tung Kin is thereafter pestered by the devil in the human form of Tai Fung.

Tai Fung demands Kong Tung Kin for his life but permits him to hand out another person’s name as his scapegoat for death however Tung Kin cannot bear to implicate the innocent and would rather leave with Tai Fung. Intrigued by Tung Kin’s great forsaking actions, Tai Fung wants to try out being human and intercepts Tung Kin’s life, taking away his career, life and even snatching his only true love, Siu Fang. Thereby laying down traps to test the true nature of this so-called good and great man. Fong Sau Fong is a woman who is extremely allergic to chemical products. In an effort to rid her fully of her allergy, Kong Tung Kin researches for a vaccine to cure her. Sau Fong is in a romance with the successor of the pharmaceutical company, Tang Yong Shen. However the couple soon broke up due to objections from Yong Shen’s father.

After-which, Sau Fong is finally moved by Tung Kin and marries him under the encouragement of Tai Fung. When Sau Fong learnt of the life and death agreement between her husband Tung Kin and Tai Fung, she discreetly suggests to Tai Fung to take her life in exchange for her husband’s life.

A highly-skilled TCM (Traditional Chinese Medicine) practitioner. Her husband Kong Zhi Da had earlier on married a wife, Jin Hua Xi, in the countryside. Hua Xi then conceived a son by the name of Kong Tung Kin. Fearing for her status, Chaw Kiu went one step ahead of Hua Xi and registered her marriage with Kong Zhi Da thus becoming the official wife.

The scheming Chaw Kiu secretly sent her daughter Kong Wai Mui to be a nurse at Kong Zhi Da’s clinic and to snatch his customers over. Chaw Kiu pulls no punches and always try to make things difficult for the son of the actual first wife, Kong Tung Kin.

The other actors in “Men With No Shadows”

Fung So Bor (馮素波) as Jin Hua Xi; Mother to Kong Tung Kin and unrecognized-by-the-law second wife to Kong Zhi Da when she is in fact the actual first wife.