In contrast to their previous private nature, Raymond Lam (林峯) and his wife Carina Zhang (张馨月) openly shared details of their marriage on reality show Viva La Romance 5 <妻子的浪漫旅行 5>. Earlier, Raymond even disclosed how had proposed to Carina. The actor cherished Carina’s supportive nature, as opposed to his ex-girlfriend who was too controlling.

When asked about his past relationships, Raymond said an ex-girlfriend had tried to force her values and way of thinking on him. In his efforts to please her, he would do things that he did not actually enjoy. She would often tell him that he was not good enough, and would ask him to learn different things. When he started to feel very inferior, Raymond realized this was not a healthy relationship and they eventually broke up.

As his most recent ex-girlfriends were Karena Ng (吳千語) and Chinese model Pan Shuangshuang (潘霜霜), netizens suspect that his revelation referred to one of them!

In contrast to his volatile ex-girlfriend, Carina speaks gently and knows how to accommodate Raymond. As long as he likes something, she will let him do it and support him, making him feel loved.

“My wife is grateful for my previous experiences, because that has molded me into the person that I am today. It has also affected our values and views on love, allowing us to be even more grateful for the happiness we have now,” Raymond said. 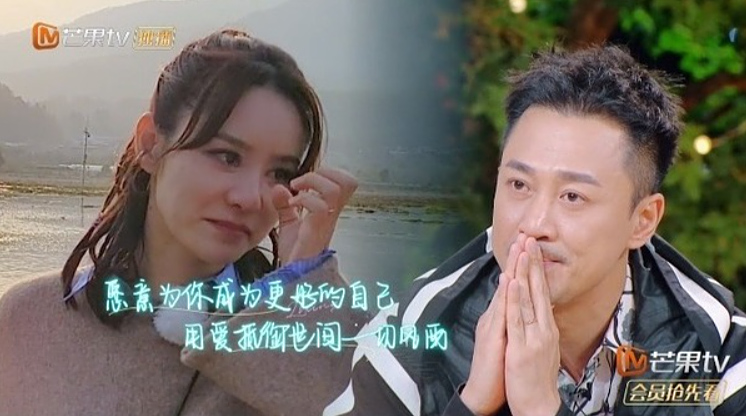 While Raymond felt Carina was a good match for him, she faced public criticism due to her lingerie model past. She said, “I feel guilty because my husband was originally [very popular], and I seem to have affected [his image] negatively. I don’t want to affect him, and I hope that many people will like him because he is really talented. He is great in many areas of life, including work and family.”

Other female guests on Viva La Romance 5 felt that the man should stand up for the woman in a relationship, and Qin Hailu (秦海璐) questioned if her husband could not protect her, then why should she marry him. Carina revealed that Raymond had offered his help, but she had told him not to intervene because she does not want him to be affected. Qin Hailu advised Carina to not overthink the situation, as she and Raymond are in a very loving marriage and should bravely continue their journey.

When asked to record a short message for Raymond to express her feelings, Carina became emotional and broke into tears while saying, “Don’t have too much pressure–I will work hard at becoming stronger. I love you and believe that as long as there is love, then anything can be resolved.” Raymond was very touched as he watched the recording afterward.