Raymond Lam’s Concert Training is Wearing Him Out 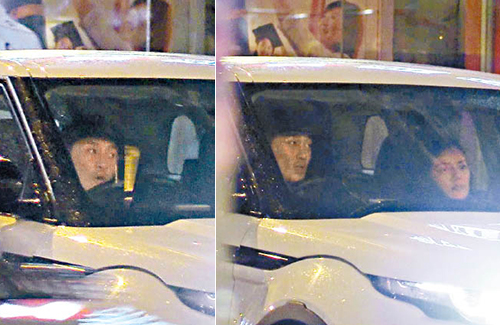 With his concert being only days away, Raymond Lam (林峯) must get as much rest as he possibly can. The actor and singer went under a “hell-like” training regime in the past month to shed pounds and build more muscle for his Hong Kong Coliseum concert.

Raymond said he dropped 21 pounds—putting him at a mere 139 pounds. The 36-year-old said the last time he’s been this light was over 20 years ago.

But even while busy preparing for the upcoming tour, Raymond still has not forgotten to set aside some free time for himself and his girlfriend, Karena Ng (吳千語).

A few nights ago, the paparazzi spotted Raymond and Karena in front of a bank in Happy Valley. Although the couple live together, reports say Raymond has been living in a separate flat in the past few months so he could put himself in more austere conditions for the concert.

Raymond waited inside his white Range Rover while Karena was withdrawing money from the ATM. Raymond was seen yawning, scratching his eyes, and slouching in his seat to a more comfortable resting position. He even closed his eyes for some quick rest. Having admitted that training is exhausting, it is not surprising to see Raymond in such a tired state.

A few moments later, Karena stepped back into the car, looking miffed. Now wide awake, Raymond patiently listened to Karena while she ranted to him. Raymond then said a few words, which made Karena smile at last. Soon after, Raymond drove back to their home.

Raymond’s Hong Kong Coliseum concert, Heart Attack LF Live in HK, will be held on April 29, April 30, and May 1.