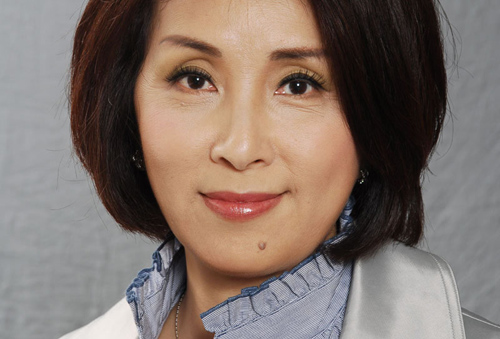 Thirteen years ago, TVB veteran actress, Rebecca Chan (陳秀珠) was adamant to give birth to her son without getting married. Bearing a high-risk pregnancy at 39 years old at the time, Rebecca suffered from severe pelvic pain and gritted her teeth throughout the pregnancy. Being a single mother, she experienced many hardships to raise and support her son. Motherhood has dramatically changed Rebecca’s lifestyle and inspired her to work harder in life.

Rebecca said, “I chose not to get married at that time, and insisted on giving birth to my son. He is my motivation for more than ten years. I did not make the wrong decision; I enjoyed the process. We led peaceful lives for many years, and I lived according to my plan. It was challenging at that time, but I do not find it to be suffering. There are so many people who are worse off than me. We take one step at a time. We need to live, so I have to work. It’s important that the child is happy and healthy, this is enough, and I did it. After all, it’s my own decision; nobody forced me. I can’t complain. I won’t think about it and will always face it positively.”

Rebecca’s son, Tiga Chan (陈迪加) adopted her surname and was named after the Japanese animated hero, Ultraman Tiga. Rebecca revealed that her 13-year-old son was unable to adapt to the stressful education system in Hong Kong. In order to reduce his pressure, Rebecca transferred him to an international school when he was in his third grade. Later on, he was successfully accepted by a school in San Francisco, United States.

Initially, Rebecca planned to postpone Tiga’s studies in the United States by two years. However, she had a filming accident on the set of Bottled Passion <我的如意狼君>, in which she fell and injured her chest, and needed to recuperate for a lengthy time. This prompted her to bring forward her plan to send Tiga to study in the States. She then stopped working for a year, to accompany her son to San Francisco.

Rebecca recalled that she and her son had a difficult time adapting to life in San Francisco. “We needed to rent an apartment and buy furniture. Language is a barrier; English is commonly used in the schools. Help! I need to take English lessons. I told my son, ‘We will give ourselves 1 year. If we can’t adapt, we will leave.’”

Rebecca disclosed that she took notes for her son’s school assignments, and they studied together. Rebecca said, “Rome’s history, Islam’s history and America’s history…I copied more notes than him! I went back to work after giving birth for a year; I never experienced taking care of my son for the entire day. Initially, I was not accustomed to it. I need to prepare three meals a day, and do household chores. We do not have a maid in the Unites States.”

When asked if Tiga had inquired about his father before, Rebecca said, “I thought about it before and came up with many answers, but he seldom asked. Sometimes, when he watched dramas in which fathers would ill-treat their children, he would say, ‘Luckily I do not have a father.’ It’s okay for him to say that, because he feels he is happy with his mother. There is nothing lacking in his life; I try to give him everything. Although other kids have their fathers, but if you are happy and enjoy your life, it is enough. I often teach him to think this way.”

Rebecca said that the modern society is able to accept unmarried women that have children. Even her father who is more than 80 years old has learnt to accept it. Rebecca understands the level of pressure in which TVB colleague and single mother, Shirley Yeung (楊思琦), currently is going through. Rebecca sent Shirley an encouraging text message. “I sent her a text message to encourage her. I wrote, ‘Women are very capable; we are able to carry all the burdens in life. You can do it!’ She is so young, it’s so much better than me.”

Rebecca Seeking For a Partner

Rebecca’s most memorable romantic relationship was with a wealthy Malaysian businessman from many years ago. The pair met when Rebecca filmed in Malaysia, in which they dated for several years. Although she almost became a Malaysian bride, the timing for the relationship was not right, which eventually led to their breakup. Rebecca said, “The timing was off; it is a pity. He is my most memorable boyfriend. He is a great person; the people [in Malaysia] are very pure and simple. He is not complicated; I like simple people.”

Dedicating the last 13 years on her son, Tiga, Rebecca also longs to find her other significant half. Rebecca disclosed that she only thought about it when she envied her American friends who had their spouses with them. Tiga is also older now, and hence she also needs to plan for herself. Fifty-three-year-old Rebecca said, “At my age, I also wish for a partner, someone who can support me and listen to my troubles,” said Rebecca.

Rebecca was not choosy over the requirements for her other half, “It doesn’t matter what nationality and age he is. Most importantly, we have to click. Even if he is a Caucasian, it’s fine.  We need to interact well. I am single for so many years, and I am used to it sometimes. If there is such a man in my life, he needs to get along with my son. It’s important that my son likes him too.”

Before giving birth to Tiga, Rebecca enjoyed going out every night for drinks. “I like to drink until I become ‘high’; it makes me very happy.” Reflecting back, Rebecca felt as if she had wasted her time. Since the birth of her son, Rebecca re-evaluated her priorities in life, making her work much harder. Still enjoying the taste of alcohol, Rebecca will drink a bit while her son is in school. Admitting that she had mixed alcohol in her son’s milk when he was an infant, Rebecca said that her son has been trained since young to strengthen his alcohol tolerance.

Rebecca Could Not Remember Her Lines in “Master of Play”

Rebecca shared that she was very satisfied with her acting in TVB drama, Master of Play <心戰>, but complained about the producer’s frequent changes of the script. She said, “I like Jonathan Chik’s (戚其義) work. His style is special, but I do not like that he wrote his script at the last minute. Most of the lines were given too last minute! During the broadcast, someone asked me about the plot. I had no idea at all; ‘Ah, so Maggie Shiu (邵美琪) has murdered so many people?’ I told Jonathan, please do not include me in his next drama. At my age, I really can’t remember the lines in a short time!”