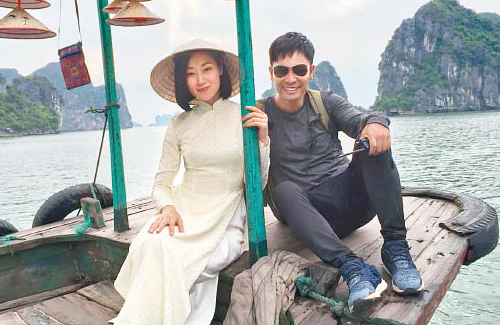 Roger Kwok (郭晉安) and Joey Meng (萬綺雯) flew to Vietnam to film outdoor scenes for Dead Wrong <致命復活>. However, due to the hot weather in Vietnam, both Roger and Joey felt faint and extremely uncomfortable under the sun.

Dressed in a caveman outfit and sporting a lot of facial hair, Roger said the 30-degree weather made filming insufferable. Even Kenny Wong (黃德斌) and Vincent Wong (王浩信), who are known to have fit physiques, said they struggled with filming the action scenes because of the sun.

Unfortunately, the weather affected Joey the most, causing her to feel faint during filming. Due to her running scenes, Joey even felt stroke-like symptoms after the cameras stopped rolling.

Joey lamented, “It’s really hot and we have a lot of filming to do here. The producer said I had the most filming among the cast. One day, I didn’t have enough sleep and felt dizzy after being in the sun for a short period of time. I had to sit down and rest before filming again.”

Despite the difficult filming conditions, both Roger and Joey said filming in Vietnam is worth it. Roger revealed that a local boatman prepared a buffet for the cast and crew after filming completing the scene on board. Roger smiled, “In Hollywood, they would have buffets for everyone and rooms for actors to rest. I’ve always hoped that there would be buffets wherever I work. Isn’t this just like a Hollywood production? Normally, I would only get takeout during work.”