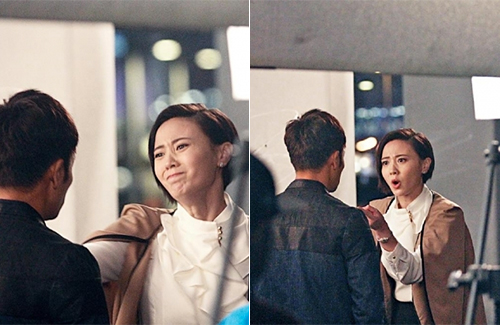 With many TVB fadans leaving the station, it is time for TVB to promote a new generation of lead actresses. The 2011 Miss Hong Kong winner Rebecca Zhu (朱晨麗) may finally be on her way to the top.

A few nights ago, Rebecca and her Fatal Resurrection <致命復活> costar Roger Kwok (郭晉安) were spotted shooting a scene for the thriller drama in Central Public Pier 9. In the show, which also stars Joey Meng (萬綺雯) and Kenny Wong (黃德斌), Roger plays a man who was abducted in Vietnam and blocked out of society for ten years. When he escapes, he struggles to adapt to his new life.

The scene being filmed at Pier 9 was about Rebecca, who discovers that Roger had cheated on her older sister. She slaps him and warns him to never go near them again. Rebecca and Roger shot the scene several times to get the correct camera perspective.

Rebecca, who plays a strong career woman, revealed about the scene, “Roger and my older sister are dating, but I find out that he actually has another girlfriend. However, I do end up falling in love with him.”

28-year-old Rebecca was introduced to the industry after winning the 2011 Miss Hong Kong Pageant. She made her official debut through the 2012 TVB anniversary drama Silver Spoon, Sterling Shackles <名媛望族> as one of the show’s female leads. It was a lackluster debut for Rebecca, who was then reduced to play supporting roles for the next few years. Fatal Resurrection is Rebecca’s second shot at playing a lead character in a major production.