Baby rumors heated up when Rosina Lam (林夏薇) turned down a starring role in TVB’s new comedy drama, Time-Traveling Officials <超時空男臣>. Her role, a Ming Dynasty crown princess who travels to the future, was replaced by Grace Wong (王君馨).

Time-Traveling Officials stars Edwin Siu (蕭正楠), Raymond Cho (曹永廉), and Matthew Ho (何廣沛) as three Ming Dynasty officials who get transported to the future when they go on a search for their princess. They end up in present day Hong Kong, where they meet restauranteur Kristal Tin (田蕊妮). Produced by Marco Law (羅永賢), Officials features a similar cast and crew of his last drama Short End of the Stick <公公出宮>, which starred Rosina Lam.

In a phone interview with the Hong Kong press, Rosina said she initially accepted the casting offer of Officials, but later decided to pass on the role. Asking if it was because she was preparing for a baby with husband Jason Mok (莫贊生), the 29-year-old said, “Haha! No! It’s because it’s been getting busy over at my company [restaurants], and I also need to prepare for the opening of my flagship in Wan Chai. There’s too many things going on. I don’t think I can accommodate a drama at the moment.”

Rosina found it to be a pity that she could not take part in Officials. “I cherish each and every opportunity that I’m given, but I’ve shed blood and tears for my restaurant chain, so I hope to take care of it first. I will continue to work hard in my future roles.”

In regards to having kids, Rosina admitted, “I do want children, however, I must look after my body first. I want to be able to balance both career and family before I start thinking about having kids.” (Have you thought about when you’ll start having kids?) “Taking it step by step! I’m not in a hurry. There’s still time.” 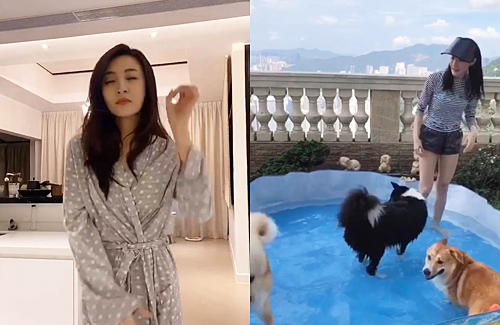