Rosina Lam’s Husband Proposes to Her Every Day 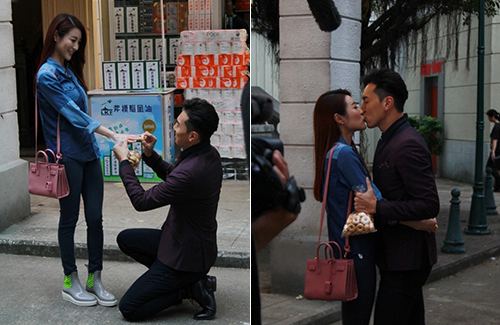 Rosina Lam (林夏薇) and Hugo Wong (黃子恆) shot a kissing scene for their new TVB drama Hot Pursuit <乘勝追擊> a few days ago in Tsung Kwan O. The scene was about Hugo using lifebuoy biscuits as rings to propose to Rosina. She accepts his proposal immediately, hugs him, and kisses him. They kissed two times for the scene.

Asking if the proposal scene reminded her of when her husband, Jason Mok (莫贊生), first proposed to her, Rosina happily said, “He proposed to me every day before we got married. Even after we got married he would still ask me if I wanted to marry him every morning.”

So does that mean Jason would give her an engagement ring every time he proposes? “Of course not. One of the reasons why I like him so much is that he’s a very simple person. During the actual proposal he did have an engagement ring, but I won’t divulge the details.”

Asking if her husband would mind her kissing scenes, Rosina said, “There’s no need for me to explain to him about this aspect of my job. He understands.” She added that she will also have a sex scene with Hugo.

Asking Hugo if there’s pressure to film intimate scenes with a married woman, he said, “Not really if she’s fine with it, but if she resists, that’ll make me even more nervous.”

Rosina said her kissing scenes with Hugo weren’t nearly as intense as her scenes with costar, Ruco Chan (陳展鵬). “There’s a scene where Ruco and I get naked together. The scene is about us stripping off all her clothes to prove to others that we didn’t steal anything. My husband knows about this scene. One day he caught me trying out skin-tight garments. He told me I was too skinny, and even reminded me to wear garments that were more tight-fitting so it won’t show on camera.”

Hot Pursuit, produced by Yip Chun-fai (葉鎮輝), is a thriller drama about a team of professional con artists. Ruco and Rosina play a pair of gamblers who are employed by a casino tycoon to find a mysterious embezzler. Joel Chan (陳山聰), Pal Sinn (單立文), and Kelly Fu (傅嘉莉) also star.