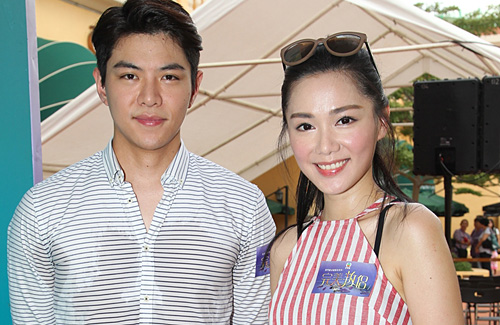 TVB artistes, Roxanne Tong <湯洛雯> and Joey Law <羅天宇>, announced that they have ended their four-year relationship. The breakup occurred four months ago, and Roxanne said there is little chance they will get back together.

Falling in love on the set of sitcom Come Home Love <愛．回家>, the couple publicly acknowledged their relationship last October during Joey’s birthday when they shared a kiss on the lips. As to their very public show of affection, Roxanne said they had felt it was the right time to move their relationship to the next level.

Speaking with the press, Roxanne denied that she had lived together with Joey during their dating relationship. Asked what went wrong in their relationship, Roxanne said, “We didn’t have a big fight. Joey is not the type of person who argues a lot. Two people together will inevitably have conflicts. Since we decided to split, there were obviously problems in our relationship. If the problem remains, there is little chance [for us to reconcile].”

Joey Law Denies Breakup was due to Jeannie Chan

Dating many beautiful actresses such as Christine Kuo (苟芸慧) and Angel Chiang (蔣家旻) before,  Joey was recently sighted eating out with Jeannie Chan (陳瀅). Asked if Jeannie was the reason behind his breakup with Roxanne, Joey said, “I feel bad for implicating Jeannie in this. When we went out to eat that day, there were a total of seven people. We didn’t go by ourselves.”

Joey remains friends with Roxanne after their split. He said, “Due to our lifestyle problems, I broke up with Roxanne four months ago. We have always wanted to treat our romance in an understated manner so we didn’t announce our split publicly. We had a peaceful breakup. We’ll continue to stay in contact and look out for each other. Hope everyone gives us some space.”