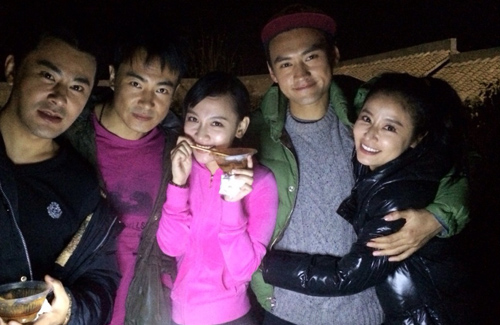 Ruby Lin (林心如) has incurred romance rumors with her costar Yuan Hong (袁弘), after the 37-year-old uploaded a photo of herself hugging Yuan Hong tightly at a hot pot dinner with the cast and crew of her upcoming drama, Realm of Love: The Long Ballad <秀丽江山之长歌行>. The photo drew in over 20,000 likes from fans and over 8,000 comments, with most netizens being supportive of Ruby and her alleged relationship with Yuan Hong.

“I heard Ruby and Yuan Hong are dating now! Yeah!” one netizen commented. Another netizen said, “We [fans] will be so happy if you finally found your true love… it would be great if it was Yuan Hong!” Sparks allegedly flew on set when the pair first began to work on the drama together. It has been reported that the onscreen couple quickly warmed up to each other due to the many intimate scenes that Ruby and Yuan Hong have shared in the drama.

The historical epic drama, also produced by Ruby, tells the story of Yin Lihua (Ruby), a Han dynasty empress who helps her husband Liu Xiu (Yuan Hong), later known as Emperor Guangwu, to restore the falling Han dynasty. The drama is loosely adapted from the 2007 time-traveling novel Realm of Love <秀丽江>, written by Li Yun (李歆). The novel chronicles the story of a modern-day woman who travels back in time to witness the life-changing experiences of a common peasant boy who eventually becomes the emperor of Han China.

Realm of Love: The Long Ballad is currently in production in Xianshan Studios in Zhejiang, and is set for an early broadcast date on Anhui Television in 2014. The drama also stars Li Jiahang (李佳航), Wang Yuanke (王媛可), Kenny Kwan (關智斌), and Yu Bo (于波).