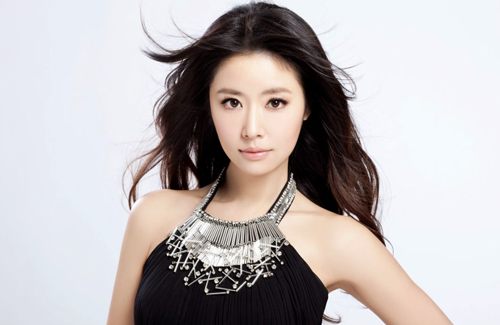 Only days away from her destination wedding in Bali, Taiwanese actress Ruby Lin (林心如) was recently spotted at a high-end store trying on her custom-made wedding gown. She has not revealed what other outfits she will be wearing on her special day, desiring to surprise her fiancé, Taiwanese actor Wallace Huo (霍建華).

On July 22, Ruby and her manager, Tan Junping (譚君平), were seen entering a Shiatzy Chen boutique in Taiwan. Dressed in a simple black top paired with black shorts, Ruby had not donned any makeup, appearing to go for a low-key look. While at the store, Ruby tried on dress after dress and, whenever she had the chance, would sit on a low stool to rest.

Shiatzy Chen’s head designer, Wang Chen Tsai-Hsia (王陳彩霞), also brought in a pink silk and satin gown, which had been custom made for Ruby. After the two women discussed how the gown could be adorned with various accessories, Ruby entered the fitting room in order to try the gown on. However, she did not seem to understand how to tie the gown’s decorative ribbon and could be seen opening the fitting room door to ask for Wang’s help.

A half-hour later, Ruby emerged from the fitting room, dressed once again in her black outfit. She and Wang animatedly conversed some more and then left the store together, perhaps to discuss additional details about the wedding, which will be held July 31.

Afterward, reporters interviewed Wang over the phone, wanting to know how many outfits she had designed for Ruby. Replying in Taiwanese, Wang said, “Don’t ask – we should leave a surprise for the groom.”