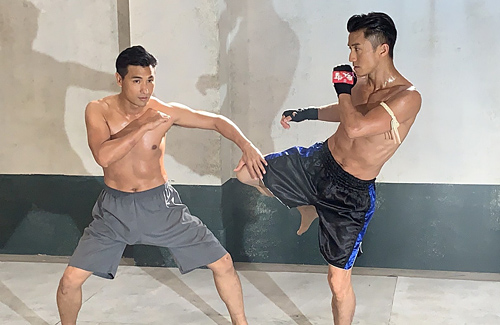 While TVB drama Chinatown <唐人街> has not aired its first episode, the main stars consisting of Ruco Chan (陳展鵬), Joel Chan (陳山聰), Natalie Tong (唐詩詠), and Grace Wong (王君馨) have signed on for a new drama produced by Jazz Boon (文偉鴻). Tentatively titled Super Messenger <超能使者>, filming for the new drama will begin in May and is themed around characters with superpowers. Although little details have been released, the drama will likely follow Chinatown’s lead and will be jam packed with thrilling actions scenes.

Unlike the superheroes in Hollywood movies, Jazz revealed that his characters will not be “flying” around and would be more down to earth. Joel will be playing as Lam Tsz Sin’s (林子善) brother and will be the strongest character in the drama. Tiffany Lau (劉穎璇), who previously played Joel’s daughter in 2019 drama Stride <大步走>, will play Joel’s romantic interest in the new drama.

Unlike Natalie’s martial arts character in Chinatown, she is reportedly not going to have any fight scenes and instead will be playing a scholarly character.

Ruco who has been busy spending time with his daughter is excited to be reunited with his co-stars. As Joel’s wife is expecting his first child, Ruco jokes that he and Joel could star in a spin-off drama called Super Dad 2.0 to share parenting tips.