Ruco Chan is Excited About Phoebe Sin’s Approaching Due Date 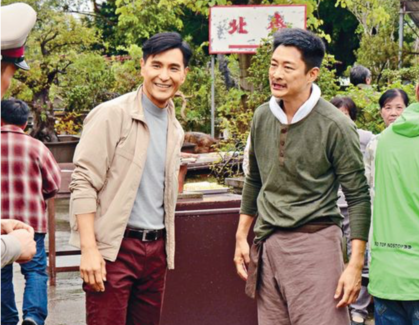 Earlier this month, 28-year-old Phoebe Sin (單文柔) and 42-year-old Ruco Chan (陳展鵬) threw a baby shower and revealed they were having a baby girl, nicknamed “Little Piggy.” Currently filming for Jazz Boon’s (文偉鴻) upcoming TVB drama Chinatown <唐人街>, Ruco expressed excitement in welcoming the arrival of their daughter next month, which is just right around the corner.

“I’m not nervous,” the father-to-be stated. “Instead I feel excited – feel excited because women are so strong. I imagine having a baby moving inside of me would be very uncomfortable and even scary, but [Phoebe] adjusted really quickly.”

To add on to that, Phoebe was the mastermind behind the baby shower – hosted in celebration of the couple’s new chapter with good friends Jacqueline Wong (黃心穎), Bowie Cheung (張寶兒), Tiffany Lau (劉穎鏇), and Vivi Lee (李美慧) attending. Ruco revealed of the event, “It felt special. I haven’t been to baby showers before, so it’s nice to have experienced it.”

Though the baby’s gender was already revealed, the couple is still deciding whether to give birth naturally or via a Cesarean section. “Everyone doesn’t know when the child will arrive,” Ruco said. “Someone asked me if I have chosen a date, and I said the doctor told us the delivery period, but my wife did not decide yet. Even if I choose the delivery date, the baby can still arrive early. So it’s up to the baby. The crew and cast of [Chinatown] won’t have a big problem with it. [Since the start of the pregnancy] until now, there were many friends who helped arrange a lot of things for us. I hope nothing goes wrong!”

Busy with baby preparations and work, Ruco admits he’s had no time to train his body for Chinatown. However, he did pay special attention to his diet, so that his figure will at least look more robust. Moreover, Jazz revealed that the actors will need to remove their clothes to show off their muscles in the series. For this reason, Joel Chan (陳山聰) has started his extreme training, and did not dare go out during the entire Lunar New year to avoid watching his friends feast. “We see that our female costars Natalie Tong (唐詩詠), Elaine Yiu (姚子羚), Tiffany can eat whatever they want, whereas, I, Philip Ng (伍允龍), and Ruco can only eat bread and chicken breast,” Joel complained.

In fact, Tiffany is the only female actress in the drama that does not have any action scenes. She expressed enthusiasm to show the audience another side of her through Chinatown, as her character is very different from her role in  Fist Fight <兄弟>.