In addition, Joel and Philip expressed that they had reduced their water intake for the past several days in order to decrease water weight and bloating. During an interview in between filming recently, Joel shared, “The scene we are filming right now is a messy fighting scene among eight people. Afterward, I will be fighting with Ruco. After filming these scenes, I’ve got to eat a pineapple bun to make up for it! I do want to continue maintaining this figure though. However, I would definitely relax and let loose a little more. The worst thing, though, is that my topless scene is at the very end [of the filming schedule]. That means I’ll have to continue this strict diet and exercise routine!”

Philip, who is the only one of the three to have a martial arts background, was asked to critique Joel’s skills. Philip said, “Actually, everyone does their action scenes very well. Joel and I were very compatible and had a lot of chemistry during our fighting scene. We did our parts very comfortably! It is not surprising that the men in this drama are doing their fight scenes well. What I couldn’t foresee was that Natalie Tong (唐詩詠) also fought very well!”

First-time father Ruco has been busy caring for his wife, Phoebe Sin (單文柔), as well their new baby girl, Quinta. On whether this had caused him to neglect training and preparing for his role, Ruco candidly expressed, “Of course it has! I’m doing my best though. I have five days of filming fighting scenes. I have tried using their dieting methods before, but I couldn’t do it. Cutting out fat in my diet makes my body temperature decrease and I constantly feel cold. Since I have to film every day, a strict diet like that will make me faint!” 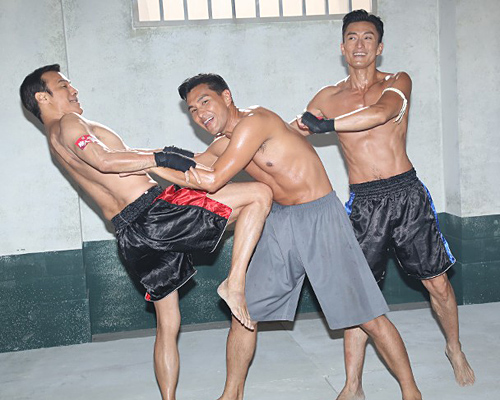