Newlyweds Ruco Chan (陳展鵬) and Phoebe Sin (單文柔) announced the birth of their daughter, Quinta, on Easter Sunday. Accompanying their announcement were photos of the family of three, which showcased the beaming parents and Quinta, whom they affectionately nicknamed “Little Piggy”. 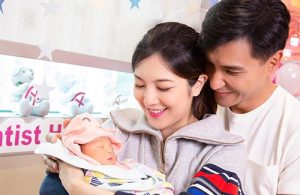 The photos, however, suggests that Quinta was born some days prior to the announcement. During an interview recently, Phoebe confirmed that Quinta was actually born in early April. However, in hopes of ensuring time for the new parents to adjust to their new family, they decided to hold off on announcing Quinta’s birth. Furthermore, Phoebe needed adequate time for rest and recovery, as she was diagnosed with mastitis, which is a painful infection of the breast tissue.

Phoebe, who has now recovered from the infection, shared, “I was very relaxed when I was pregnant. However, the postpartum confinement was completely different. I was very tired and weak. Initially, we wanted to announce Quinta’s birth earlier, but then I came down with a fever. Apparently, not every new mother is suited to breastfeed. I am actually a suitable candidate. I had a very nutritious diet while pregnant, so I had plenty of milk; an oversupply, actually. If not treated properly, it would easily cause infection and other health issues. That’s why I had mastitis.

“My postpartum confinement was very difficult, because uterine contractions are very uncomfortable. In addition, I had a wound from delivering Quinta via C-section. Breastfeeding was painful as well. I initially thought Quinta was biting while being breastfed. It was hurting really badly one day and I was running a fever, so I was admitted to the hospital. The doctor suggested I stay in the hospital for two days to get anti-inflammatory drugs through an IV. I insisted on going home though, because I really missed Quinta. Besides, I was already in the hospital for a period of time after giving birth, so I really didn’t want to stay anymore. In the end, the doctor prescribed me some medicine to take at home.”

Fortunately, the new mother has now recovered and has hired a lactation consultant to help. Phoebe expressed, “The most distressing thing is that Quinta has not had breast milk in several days. Initially, it was so painful that I gave up and switched to formula milk. However, Quinta did not adjust well. So later, we tried mixing breast milk and formula milk, which worked better. We hired a lactation consultant to help massage my breasts and help unclog my milk ducts. Hopefully I will be able to breastfeed again soon!”

As a first-time father, Ruco added, “Quinta’s health is okay. We have medical professionals to help if not. I am most worried about my wife. Her emotional state both before and after delivery must be handled well. Because of her mastitis, she has been suffering greatly. I need to arrange things and handle matters better.”

Despite Ruco’s popularity, TVB has not released the broadcast schedule of his three completed dramas.