In the events leading up to the finale, Sam Sir (Ruco Chan) makes the biggest mistake in his love life. After solving the SDU assassination case, Sam Sir (Ruco Chan) had one too many drinks and returns home seeing someone in his bed. He assumes that it is his fiancée Wing (Rosina Lam 林夏薇), but it is actually Ana (Crystal Fung 馮盈盈) who went to his home to pick up a computer part. 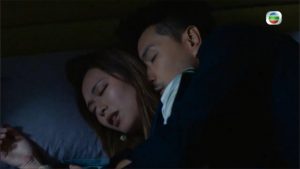 Heartbroken that he is about to get married, Ana drinks the beer in the refrigerator and falls asleep drunk in their bed. Mistaking Ana for Wing, Sam Sir removes his clothes and climbs into bed. The next morning, Sam Sir wakes up and Ana is gone, but he accidentally steps on her earring and discovers the truth.

Refusing to forgive Sam Sir for sleeping with Ana, Wing wants to break up. Begging for another chance, Sam Sir pleads that he hopes to spend the rest of his life with her. However, Wing said her life has been revolving too much around him–she is hurt too deeply this time by his betrayal.

The finale made many viewers upset at the turn of events, and how Ana intruded in Sam Sir and Wing’s relationship. They felt the plot is illogical as Ana was aware that she was not in her own home, and questioned whether she intentionally slept on the couple’s bed.

Today, the cast gathered together to watch the finale of Sinister Beings. Both Ruco and Rosina did not want their drama to end yet, as they were both attached to their characters.

Rosina’s popularity exploded after the drama aired, and gained 1 million new followers on social media. As to her crying scene especially moved the audience, Rosina said, “I’m very grateful. I remember filming the scene vividly–I couldn’t withdraw even after the cameras stopped rolling and continued crying for a very long time.” The actress also stated that she would not tolerate cheating in real life.

Joking that he may have lost fans because of his character’s betrayal, Ruco even came up with ideas for the sequel to explore. “Crystal could become pregnant, but didn’t tell me and returns years later. As for Jonathan Cheung (張頴康), he can come back to take revenge on me.”

Ruco Chan Thanks Phoebe Sin for Making His Life Complete