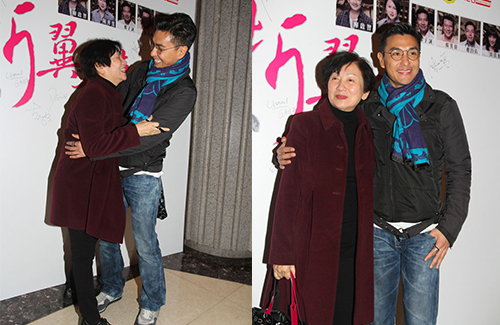 On December 17, Ruco Chan (陳展鵬) attended the VIP premiere showing for the Hong Kong stage play Angels’ Psalm <折翼天使>, which stars Liu Kai-chi (廖啟智), Amy Chan (陳秀雯), and Timothy Cheng (鄭子誠). Ruco took everyone by surprise when he called out “Ah Ma!” during the middle of photos—it turns out that he was calling out to Film Queen, Paw Hee-ching (鮑起靜). The pair immediately hugged when they saw each other.

Award-winning actress Paw Hee-ching and Ruco collaborated in the 2007 ATV drama Stupid Child <笨小孩>, which was one of Ruco’s last drama with the station. In the series, Ruco portrayed a mentally retarded youth, and Paw Hee-ching portrayed his mother.

Speaking of stage plays, Ruco said he starred in a theatrical play in 1998 with John Chiang (姜大衛), Irene Wan (溫碧霞), and Josie Ho (何超儀). “It was over ten years ago,” he said. “I kind of forgot how that feeling was like.”

The Captain of Destiny <張保仔> actor said he would like to star in another stage play, but his current schedule does not allow time for it. “It’s a different style of acting. You’ll fall into a specific acting method once you start acting in enough television dramas. Doing theatre again can add new elements to your performance.”