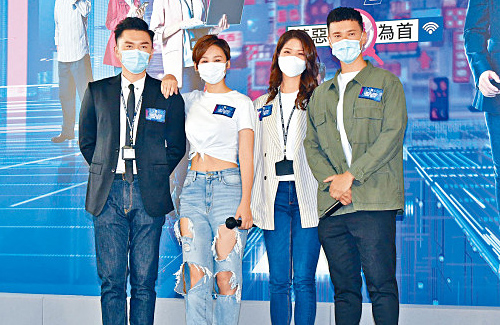 The cast of cybercrime drama On-Lie Game <迷網>, including Mat Yeung (楊明), Samantha Ko (高海寧), and Hera Chan (陳曉華), attended a promotional event recently. Due to the rising COVID-19 infections in Hong Kong, the cast all wore face masks at the event and did not remove them during the press photo session.

Although Samantha was initially only noted for her voluptuous figure after competing in Miss Hong Kong, the 33-year-old actress is finally receiving more recognition for her acting. Making a cameo appearance in Chinese drama, Nothing But Thirty <三十而已>, netizens praised Samantha for her acting improvement. In addition to expanding her resume in China, Samantha is also partaking in TVB drama, Seven Princesses <七公主>. Due to the stay-at-home order, Samantha revealed that outdoor filming was halted for one week.

Not only is the pandemic affecting filming productions, but it is also impacting many artistes’ side businesses. Mat, who owns two soup shops, is having difficulty sustaining his business. Revealing that his shop’s profits have dropped 30 to 40 percent lately, Mat expressed that he is considering shutting a few of his shops down.

Hera, who is receiving more filming opportunities lately, is continuing to work during the third wave of Hong Kong’s outbreak. She habitually wears a face mask when not filming and regularly washes her hands and disinfects her surroundings.