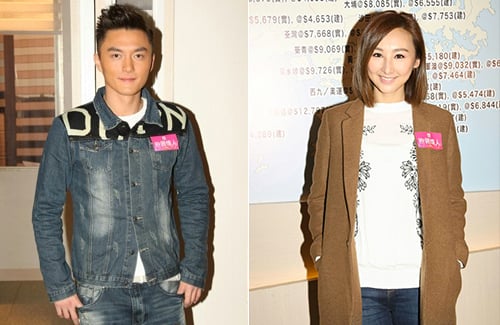 Rising stars Mat Yeung (楊明) and Samantha Ko (高海寧) are the new leads in the upcoming TVB drama Commissioned Lover <抱佣情人>, and producer Poon Ka-tak (潘嘉德) is not going to go soft on them.

Samantha has had experience in playing roles with heavy screen time before. She costarred Kitty Yuen (阮小儀) in last year’s Love as a Predatory Affair <愛情食物鏈> and plays a large supporting role in TVB’s upcoming drama My Unfair Lady <不懂撒嬌的女人>, which was shot last year. Commissioned Lover, however, will be Samantha’s first drama as leading lady.

Not only is Samantha in immense pressure for having to carry her own show for the first time, she is also stressing out about some of the “extreme” scenes she would have to do in the upcoming weeks. The 30-year-old shared, “There’s going to be a lot of sacrifices. I don’t know how we’re going to do them yet.”

As for her thoughts on being a leading lady, Samantha said, “It’s hard work. I’ve never had such a long studio filming schedule before. My character is very cool and I’m always scolding people. I need to keep up my energy.”

Commissioned Lover is Mat’s first drama as the first male lead as well. He said, “As a male lead, you need to dedicate more time to working out your character. I play a character whose emotions are always running high, and I’m always yelling. Before getting into character, I would listen to some jazz music to keep my epinephrine levels high.”

At the mention of the upcoming Lunar New Year, which falls on January 28, Matt was asked if he would go to Malaysia to spend it with his girlfriend Lisa Ch’ng (莊思明) and her family. Matt said, “They will be coming to Hong Kong, so I’ll definitely pay them a New Year’s greeting visit.”