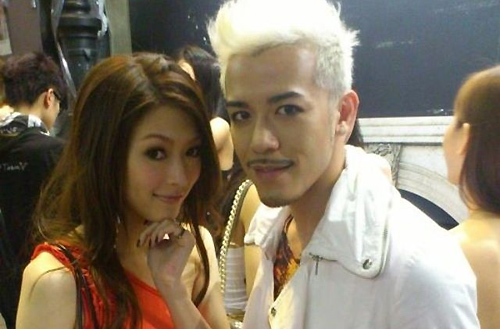 With a good looking cast including Liu Yuqi (劉羽琦) and Sammy Shum (沈震軒), the film focuses on the partying and sexual nightlife of Hong Kong, which has certainly stirred controversy. However, the box office figures proves that once again, sex sells.

At the celebratory party, actress Shiga Lian (連詩雅 ) said that she will attempt a daring feat if the box office sales continue to rise. When Liu Yuqi was asked what she would do, she teased that she may strip!

Liu Yuqi’s performance in the film received rave reviews and shot her to stardom, allowing her to free herself from the negative press linking her to Raymond Lam (林峰). Yuqi said that she hopes the viewers will see her improvement in acting and give her a chance to show that she is a serious actress.

Sammy Shum also became popular for his portrayal of the hard-partying character, “Lan Kwai Fong USB” in the film. In reality, he actually prefers to remain low-key and spend his free time at home, in which he wears rags and thick glasses.

Sammy said, “I’m actually a really boring guy. I prefer girls who are simple-minded; I tend to get along with them more. Of course, feelings are the most important when it comes to a relationship.” Several months ago, Sammy broke up with JJ Jia (賈曉晨), who is now dating Louis Fan (樊少皇).

Sammy has been struggling at TVB for the past 6 years playing various supporting roles, but never as the lead. His career is definitely looking brighter now that he has proven himself as an actor in films.