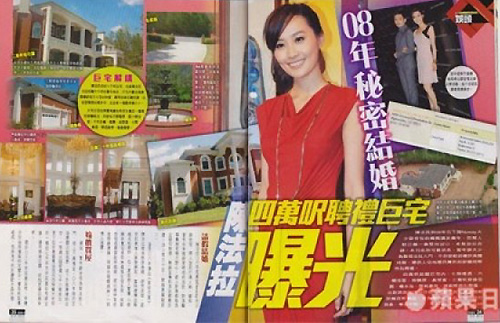 The rumors that Fala Chen (陳法拉) secretly married Neway heir, Sit Sai Hang (薛世恒), in 2008 have circulated for several years. However, the couple continued to retain their silence over their marital status, which they did not actively deny. A reliable source revealed that in order to marry Fala in 2008, Sit Sai Hang held the wedding in the United States and gave  $10 million HKD in cash and a 6,800 square feet mansion as a gift to Fala’s family! Fala’s mansion was located in Atlanta, Georgia, in the United States. Purchased at a price of $760,000 USD, the luxury mansion contained 7 bedrooms, 6 bathrooms, an audio-visual room, a billiard room, and 30,000 square feet of front and rear gardens. Numerous amenities were included in the house. There were even 2 kitchens in the house!  Compared to other TVB actresses who lived in cramped apartments of only several hundred feet, Fala was the daughter-in-law of a wealthy family and acted in her own way.

Fala met Sit Sai Hang in 2006 and quickly fell in love.  It was understood that before getting married, Fala possessed great ambitions in her acting career. She was extremely active and enthusiastic towards people, putting in her full efforts at promotional events and her performances.  Along with her flirtatious manner, Fala was considered as the second Michelle Ye (葉璇).

While filming Moonlight Resonance <家好月圓>, Fala’s attitude changed sharply. She was often sour-faced and vented at the production crew.  Allegedly, Fala was frozen by TVB at the time. An insider revealed, “She took a long vacation in order to obtain their marriage registration in the United Stated. Sit Sai Hang’s father and younger sister also accompanied them on the trip.”

Fala and Sit Sai Hang’s romance came to light in 2006. Initially wary to acknowledge their relationship, the couple recently publicly acknowledged being together. Fala’s career turned more successful in recent years and did not mind discussing Sit Sai Hang before the media. She often praised him for being responsible and detail-oriented. The couple were acknowledged by the public. One of our readers, thewong, discovered that Fala Chen and Sit Sai Hang also purchased a $2.3 million USD house in Half Moon Bay, California in 2008. According to zillow.com, the property is located on 1/2 mile south of Half Moon Bay, on 30 + gently rolling acres with gorgeous views of the Pacific Ocean and the city of Half Moon Bay. The main single story house boasts vaulted ceilings, walls of windows, 3 bedrooms, 2.5 bathrooms, Sun room, Office, Formal Dining room, Gourmet kitchen and breakfast area. Below are photos of the property from zillow.com: Excerpt from Next Magazine

Jayne: I always believed in the marriage rumors between Fala and Sit Sai Hang. They come across as if they are in a very settled and stable sort of relationship.

Properties are cheap in Atlanta, Georgia. The same house in the New York City area would likely cost $2 million plus.

Do you think the exposure of Fala’s marital status will affect her career development?