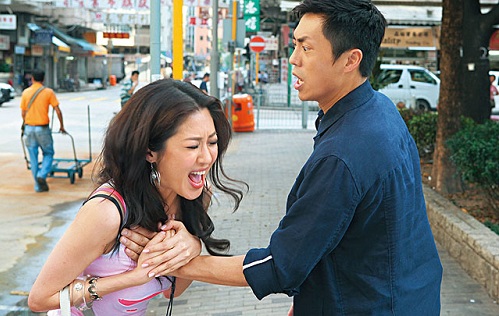 Sharon Chan (陳敏之) and Sammy Leung (森美) filmed a daring scene for TVB drama, Justice Attack <法網追擊> recently. As  police officers on an undercover assignment, Sharon pretended to be a prostitute, while Sammy acted as a molester. The scene required Sammy to place his hand on Sharon’s chest. Due to outtakes, Sammy touched Sharon’s chest 20 times!

While filming the scene where Sammy touched Sharon’s chest, she yelled at the top of her lungs, “Sexual assault! Sexual assault!” An elderly male pedestrian thought that it was a real cry for help. When he realized that Sharon and Sammy were only filming for a TVB drama, he shouted, “What are you crying sexual assault for! You’re too noisy!”

Dressed in a tight tank top and orange shorts showcasing her 33C bust and 42-inch-long legs, Sharon attracted a crowd of interested male pedestrians during the filming in Sham Shui Po. When Sharon bent down, a man recorded a clip of her cleavage and kept playing back the video for his viewing pleasure.

The producer of Justice Attack, Man Wai Hung (文偉鴻), had to decide where Sammy Leung should place his hands on Sharon Chan’s chest. Producer Man said, “We discussed the scene with Sammy last night. Where should his hand touch Sharon’s chest? Should he touch the top or bottom portion of her breast? Due to nervousness, will the appropriate spot be touched? We were not afraid that Sharon will mind, but rather how will Sammy explain to his wife!” Sammy was embarrassed that it was revealed that he was afraid of his wife’s reaction.

The scene of Sammy touching Sharon’s chest resulted in 20 outtakes! During one of the outtakes, Producer Man asked Sammy to be brave and touch Sharon’s chest as required by the scene. Sharon even took Sammy’s hand and placed it on her upper breast, to warm up when the cameras started rolling.

Afterward, Sammy said outrageously, “Without touching it, I never would have known that Sharon’s chest is a water bag! This scene is a great favor granted by the producer! Please add a bed scene too!”

Teased by Sammy, Sharon retorted, “My chest is real; I did not add anything extra! To accommodate the role of a prostitute, I wore a nude bra to boost the cup size to make it easier for you to grab!”

Sammy praised Sharon for her accommodating demeanor. He said, “I will not film such a scene with any actress! She has to be beautiful and cool! Realizing that my filming partner would be Sharon, I agreed to it!”

Source: Next Magazine #1160 via ihktv.com

Jayne: In past series, such a sexual assault scene would be fulfilled by the actor touching the actress’ butt. It is certainly more daring for Sammy to be touching Sharon’s upper chest, but still unrealistic. A real molester certainly would grab in the middle. Since the scene lacks realism anyway, what’s the point of adding it in?