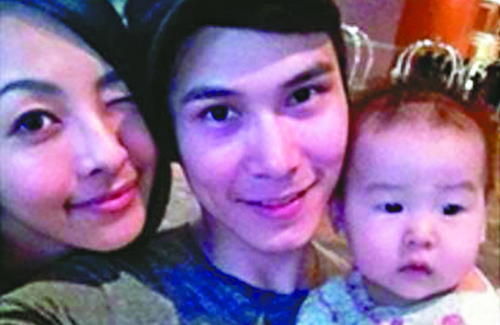 Above: Shawn Chien’s wife, Alisya Yeh, jumped to her death, leaving behind their baby daughter.

Alisya Yeh (葉翎涵), the 24-year-old wife of former Mo Fan Bang Bang Tang <模范棒棒堂> member Shawn Chien (簡翔棋), had killed herself by jumping off the roof of a building in Macau on Friday, May 31. Media outlets indicated that Alisya’s suicide was due to stress about Shawn’s affair with another woman, which Shawn himself admitted on his official Facebook account.

According to Macau press reports, a young “Taiwanese celebrity couple” was seen heatedly arguing last Friday morning. The woman, later confirmed to be Shawn’s wife, Alisya, rushed to the roof of a building and jumped to her death. It was reported that Shawn had witnessed the entire suicide.

Aside from Shawn, a Macau local also witnessed the fatal jump and contacted the authorities. The local later updated on her Facebook, writing, “Someone jumped off a building! Scared me! I was the one who called the police.” Reports indicated that the 29-year-old Shawn, who currently works at Sands Macau Hotel as a Public Relations agent, has been cheating on Alisya in the past year with a woman known by the surname Hsu, also a Taiwan native. Alisya and Miss Hsu had several altercations with each other, and it was believed that Shawn had sided with Miss Hsu in most of these verbal brawls, disheartening Alisya.

Shawn uploaded a mournful statement on Facebook after his wife’s death, “I am sorry, my wife… I am a worthless human being, and because of my infidelity, I have killed you and my daughter has lost her loving mother. I have no ability to do anything else but stare as you said goodbye to me in front of my eyes. You have given me my biggest lesson, but my wife, can you please not give me this lesson? Can you please tell me that this was all a joke or it was just a dream? Going through 18 levels of hell is not enough of a punishment for me. I was the one who should be leaving. It’s me, not you, why did you have to be so stupid? […] Don’t worry. I will take care of our daughter, and I will see you again. I love you, Alisya Yeh. Sorry.”

Shawn, formerly known by his stage name Xiao Ma (小馬), was a first generation regular on Christine Fan’s (范瑋琪) talent-scouting variety series, Mo Fan Bang Bang Tang, which premiered in 2006. The show was known for pitting 20 boys against each other for a spot in the six-member boy band Lollipop.

Shawn failed to make it to the final cut, but he and six other Bang Bang Tang members were recruited to join Lollipop’s junior labelmate Choc7 in 2008. After releasing their first EP to underwhelming responses, Choc7 inadvertently disbanded in 2010.

The bassist decided to retire from showbiz after completing his mandatory military service sometime in 2011. According to various sources, Alisya worked as a model before marrying Shawn, and the couple moved to Macau after their marriage.

At the 2013 Hito Pop Music Awards held in Taipei on June 3, Christine spoke up about the matter. Christine said that she has not been in contact with Shawn since her show ended in 2008, but expressed her pity on the tragic matter.

“I didn’t know about this until Blackie Chen (陳建州) told me. I didn’t even know he married until this year!  My heart aches for him, and I hope his wife will rest in peace.” As for her thoughts on Shawn’s infidelity, Christine said, “It is not in my right to comment on this matter, as I am not involved. But, I will be praying for him and his family.”