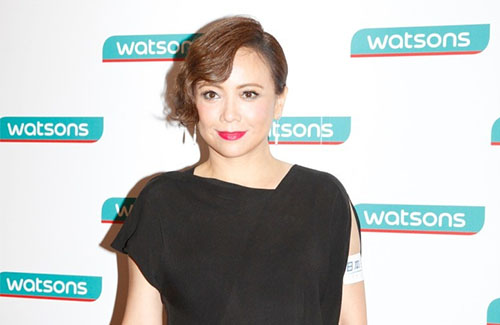 At an awards ceremony held in Wan Chai, Sheren Tang (鄧萃雯) shared that she has already “peacefully” parted ways with Wong Cho-lam’s (王祖藍) agency, ending their contract of one year. Sheren was the first artist to sign under Cho-lam’s studio.

This announcement came soon after the rumors of Wong Cho-lam and Sheren Tang not getting along, leading Sheren to terminate her contract with Cho-lam’s studio. Cho-lam later clarified that Sheren left because she wanted to establish her own studio.

Sheren confirmed her plans of starting her own studio, saying, “It’s true. I’m learning here and there. Right now, the most important thing is to hire an assistant. (What form of management do you want?) I’ve been doing this career for many years. I know what I want. I need someone who can help me fulfill it.”

Asking Sheren about the jobs she’s interested in doing, the Rosy Business <巾幗梟雄> star said, “When I first signed with Cho-lam, I told him that I won’t be an easy job. At this point [in my career], I’m not trying to wait for an opportunity to become a trend [again]. I don’t need to get approval from the public anymore, and I don’t need to earn a lot of money. He knows this. I’m not an easy job, because I’m not for money. I do want to be a performer who can be influential.”

Would Sheren’s new studio be under Cho-lam’s? “It won’t,” said Sheren. “There are too many artists under his studio. You have to go through so many people. I couldn’t handle it. [Cho-lam’s] worked hard.” Asking if there were any problems working with Cho-lam, Sheren said, “There were no problems. He’s very nice. We started working together before we announced our collaboration, so it’s been nearly two years. Since he was doing so much for me, I told him we should sign a contract. He told me to not think about that yet, and just try it out if it works for me. He knew I haven’t signed with a big company for a while, so I might not be used to it.”