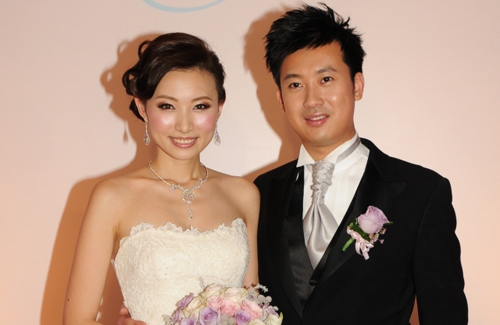 Sherry and Anthony signed their marriage certificate at the banquet. “I didn’t even need to read the document before I signed,” Sherry said in a brief press conference after the banquet. “All I needed is to take one look at him.” Anthony joked that Sherry is a slow-thinker – Sherry did not cry tears of joy until 24 hours after their official marriage.

At the star-studded wedding banquet, a video documenting the couple’s wedding adventures in Sanya was broadcast. In the video, Anthony recited, “This is my promise to you today – in the future of our marriage, I will love you, understand you, and pamper you will all my strength. You will be the world’s happiest woman.”

The documentary also included endless clips of the bridesmaids playing games with the groom and his brothers. Many of the games included cross-dressing, “bromantic” kissing, and torturous truth or dare games, bringing wedding guests to fits of laughter. Sherry disclosed that it was her bridesmaids – Leanne, Oceane, Sarah, and Natalie – who came up with the games.

In related news, Leanne Li, who is currently dating Wong Cho Lam (王祖藍), expressed that she does not plan to marry Cho Lam soon. “[But] I will marry him when Inbound Troubles <老表, 你好嘢!> reach 50 points!”