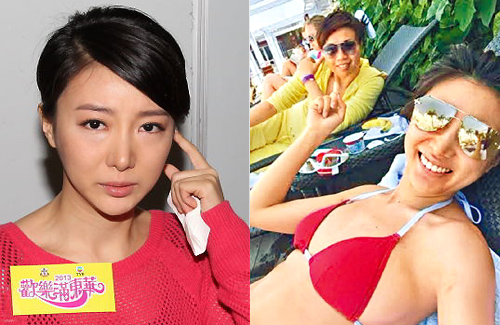 Although Sire Ma’s (馬賽) apology over the mishandling of her lesbian relationship was meant to salvage her public image, ex-girlfriend Wang Ziqi (汪子琦) is not willing to let Sire walk away free. Wang Ziqi called Sire a liar and schemer, after Ziqi saw through Sire’s materialistic nature.

Taking a one-month hiatus since her lesbian love scandal was exposed, Sire finally emerged yesterday to talk openly about the incident. Sire first apologized to the media for blasting them for “quoting out of context”, when it was actually Sire who had lied about being in a lesbian relationship.

With her mother beside her while addressing the press, Sire cried and said she regretted her “irrational behavior” had hurt her family. Sire said, “I saw my family worried and arguing about me. My mother was unable to eat her meals and grew a lot older. I was heartbroken and felt that I was very unfilial!”

Sire’s Mother Had Approved of Her Lesbian Relationship

Wang Ziqi’s ex-girlfriend, Laura Lee, said that both Sire and her mother were equally materialistic. Sire and her mother allegedly pressured Ziqi to transfer her $20 million HKD house under Sire’s ownership. As Ziqi realized that Sire had eyes on her money, Ziqi finally decided to break up. Sire was unwilling to let the relationship go, until tabloids publicized that she had received $200,000 HKD monthly allowance from Ziqi.

Sire said that her family was hurt by her lesbian relationship, but Laura claimed they were all lies as Sire’s mother approved of her dating Ziqi. Laura provided photos that showed Sire and her mother vacationing with Ziqi in Southeast Asia together. Sire’s mother even took a passionate kissing photo of Sire and Ziqi while out at sea. The trio went on vacation in November, when Sire was on a one-month hiatus from TVB.

Laura Said Sire Has No Morals

Laura vowed to “expose Sire as a fox in disguise” and revealed proof that Sire had received a Cartier ring, Chanel watch, jewelry, and $200,000 HKD in monthly allowance from Ziqi. Laura said, “Sire’s pretty good in acting; she’s actually a very terrifying woman.”

Calling Sire to be “morally bankrupt”, Laura blasted her for betraying their friendship and being the third wheel in stealing Ziqi away from her. Laura said, “I want to know who had betrayed whom. She betrayed me over money and career opportunities and fought for my lover.”

Although Ziqi publicly apologized to Laura for hurting her, Laura said that they will not get back together as there were love wounds, but will only remain as friends.

Speaking with the press today, Sire said that her relationship with Ziqi was over and will put everything behind her. Sire said, “I do not want to say something that will hurt other people” when prompted to respond over Ziqi calling her a liar.

As to photos that showed Sire gambling at a casino in Singapore in November, Sire said, “I didn’t gamble; I only accompanied a friend there.” Asked if she was there with Ziqi, Sire said, “Everything is already over. I hope everyone gives me space.”