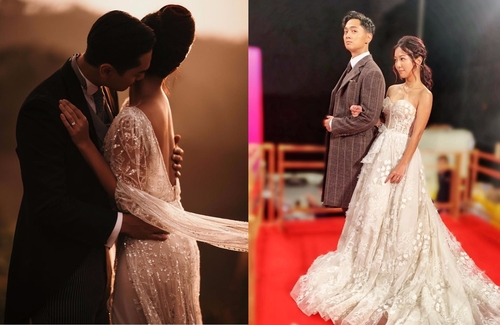 As one of the first Chinese celebrities to announce good news in 2020, Fred Cheng (鄭俊弘) and Stephanie Ho‘s (何雁詩) engagement is gaining a lot of attention. The young couple recently accepted an interview on Star Talk to satisfy fans’ curiosity about their relationship, and Fred generously revealed what led him to pop the question.

He expressed, “I asked my friends how they realized they were ready for marriage, and they said, ‘You’re never ready. You’ll never have that feeling, but if you’re comfortable and happy, what more are you waiting for?’ So yeah, what more was I waiting for?”

And just like that, he asked Stephanie to marry him. However, like any relationship, they overcame challenges to get to where they are today. In the beginning, Fred wasn’t accustomed to Stephanie using his computer. “I’ve been independent for so long and lived alone for a long time, so I’m not used to someone logging out of my email on my computer,” Fred explained.

He also said there was one time he was furious with her for changing the password to his phone hotspot. Stephanie shared, “It was my dog’s name and my birthday because it’s easier to remember than the default passwords, but he was really mad. I didn’t think it was wrong of me, so I had to learn how to respect his boundaries.”

Though Fred gave Stephanie his computer password recently, he told her to create her own account so she wouldn’t need to use his account, but the software that she needed to use were only accessible through his account. Still, it was already a big step for Fred.

“The arguments we had back then were a good way for us to better understand what’s important to each other,” Stephanie acknowledged.