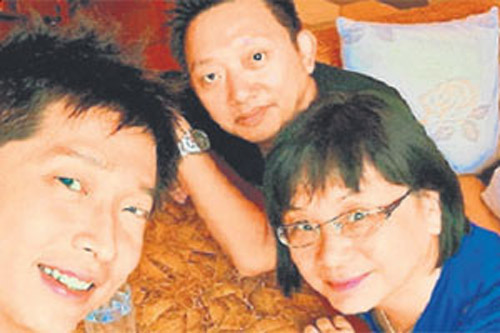 Steven Ma (馬浚偉) was apparently diagnosed with a “big-headed disease” thus enraging his manager of 10 years to her limit and resigning on her own accord! Steven has been in the industry for 18 years now and liked to flaunt out his “Number 1 Brother” status from time to time.

In recent days, the response for Steven’s new TVB drama, The Life and Times of a Sentinel <紫禁驚雷>, was relatively positive.  As a result, his complacency grew even further and thus pushing the working relationship with his manager, Xu Jie (徐姐), to the very last straw.

Xu Jie was initially an experienced media communication personnel. Ten years ago, Steven asked and hired her to be his manager. For many years now, Xu Jie handled all of Steven’s matters personally and often put up a one man show, acting as Steven’s assistant, administrator and even as his psychiatrist!

However, Steven often offended people through words from his mouth. While filming Ghost Writer <蒲松龄>, he openly criticized Linda Chung’s (鍾嘉欣) acting as mediocre. Recently, while filming The Life and Times of a Sentinel, he bashed newbie Katy Kung’s (龚嘉欣) acting skills as not being good enough. It was known that someone spoke to his manager, Xu Jie, about this but of course Xu Jie only had good words to say about Steven.

It was understood that it was the culinary show that Steven hosted, Apprentice Chef 2 <大厨出马>, that finally tripped the spark of outrage and led to the resignation of Xu Jie. Insiders revealed, “Since Xu Jie saw that Apprentice Chef 2 received such a resounding response and also knew that Steven Ma had a wish all along to return back to the music scene, Xu Jie wanted to ‘strike the iron while it’s hot’ and find him a record company to fulfill his wish. However, Steven was extremely picky about the record companies and did not appreciate Xu Jie’s efforts, going as far as to vent his frustrations on her when the record deal negotiations fell through. Xu Jie suffered an intense amount of pressure due to this and finally felt that enough was enough and quit on Steven.”

To which, Steven refuted the allegations and said, “Xu Jie went off to further her studies! My TVB manager will help me.” However, when reporters called Xu Jie and asked her why she resigned on such an abrupt notice, Xu Jie laughed and replied, “Because I’m happy lors!” but afterwhich she panicked and said, “I don’t wish for anyone to misunderstand that I told you anything,” while immediately hanging up the line thereafter.