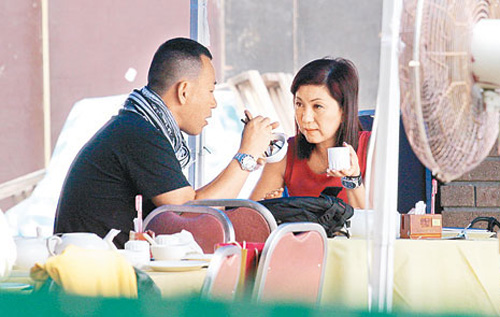 Facing a high staff turnover among artists and production crew, TVB quickly drafted an emergency response plan. Alleged to be responsible for the recent exodus of employees, TVB executive, Virginia Lok  (樂易玲) hastily met with Bowie Lam (林保怡) yesterday to ask him to return to the company. Unfortunately, the paradox was that on the same night, Bowie also met with Ricky Wong (王維基), Chairman of City Telecom, who will be entering the free television broadcasting industry next year and pose as as a rival station to TVB.  In addition, Bowie was offered a $18 million Yuan contract to sign with a mainland company. Bowie certainly had numerous “chips” in hand to choose from!

With the exodus of personnel, TVB was thrown into confusion recently. Vice Chairman, Mona Fong (方逸華), asked  General Manager, Stephen Chan (陳志雲), to regain control of the Artist Management department and resolve the recent staff turnover crisis. Currently overseeing the Artist Management department, Virginia Lok also took the opportunity to meet with Bowie Lam, who had left TVB in May. At 10 AM yesterday, Bowie Lam and Virginia Lok met at the Sai Kung pier for tea. The duo appeared to be very harmonious, chatting and often laughing together. Bowie poured tea for Ms. Lok and served her roast pork buns. Although the contents of the conversation were not clear, it was likely that Ms. Lok attempted to persuade Bowie to return to TVB due to the recent high staff turnover and ex-TVB artists joining rival television stations.  Although appearing at ease initially, Bowie started frowning and wrung his hands together in reservation, while appearing in deep thought as the conversation progressed.

After conversing for over an hour, Ms. Lok paid the bill and left. Since Bowie and Ms. Lok spent the time chatting rather than eating, the bill was only several hundred dollars (HKD).  Walking to the parking lot together, Bowie and Ms. Lok waved goodbye and left Sai Kung in their respective cars.

In the evening, Bowie Lam attended the dinner again, but this time met with Ricky Wong, Chairman of City Telecom. At 7:20 PM, a reporter spotted Mr. Wong inside the restroom of a Japanese restaurant located inside a hotel.  Ten minutes later, Bowie appeared at the same restaurant. Due to the timing of the appearance of Bowie and Mr. Wong at the same restaurant, the reporter estimated that the duo met to discuss collaboration plans.

Asked whether Bowie was meeting Ricky Wong for dinner, Bowie only smiled and did not respond. At this time, five men dressed in black appeared to block the reporter from asking further questions, leading the reporter to leave the scene. The situation was intriguing and Bowie took the opportunity to calmly enter the restaurant. Although Bowie failed to respond, Mr. Wong wrote on his blog yesterday, “I hope to convince a heavy decision-maker to quit.” Allegedly, Bowie had agreed to return to TVB to film War and Beauty 2 <金枝慾孽2> earlier, unfortunately there were still many changing variables in development.

Aside from Ricky Wong’s attempt to recruit Bowie, a mainland company offered to sign him for $18 million Yuan. Bowie Lam had a lot of options to choose from!

Facing a crisis, TVB not only attempted to seek the return of former stalwarts such as Bowie Lam, it also attempted to persuade artists with soon-to-expire contracts to remain at the company.  It may be possible for Stephen Chan (陳志雲) to pursue these efforts personally.

The reporter contacted Steven Ma (馬浚偉), who expressed the desire to leave TVB earlier.  Steven admitted that he spoke on the phone with Mr. Chan, “We did not have time to sit down and discuss in detail. I am currently filming a series, but he took the initiative to call and understand the situation.”

Joe Ma Still Has to Consider

With his management contract due to expire at the end of the year, Joe Ma (馬德鐘) admitted that TVB offered him favorable conditions to attract him to stay, “I am still in the consideration stage. Since I have been with the company for many years, I do wish to see the outside world.” Joe indicated that he has been in discussion with Ms. Lok regarding his contract renewal and has not been in touch with Stephen Chan.  Joe indicated that there was a fifty percent possibility in renewing his management contract with TVB.

Jayne: Perhaps Bowie Lam may indeed return to TVB to film “War and Beauty 2”; it really depends upon his schedule. However, Steven Ma is bent on resigning from TVB. As for Joe Ma, it depends on his confidence about his market in mainland China. If Joe has enough popularity there and China offers a promising income, I doubt he will renew his contract with TVB.