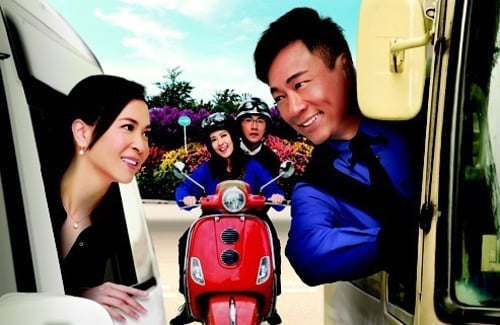 Rear Mirror was previously known as Time for Marriage <男大當婚> and was described to be a small, light-hearted production.

After going through a ruthless heartbreak and experiencing a traumatic business failure, minibus driver Kei Yat Sing (Wayne Lai) pulls himself together to atone his mistakes. Despite his own struggles, he insists to take in the responsibility of raising his ex-girlfriend’s illegitimate daughter. His next-door neighbor Hung Tsz Long (Ronald Law 羅鈞滿) wants to match him with his own elder sister Hung Lai Sa (Amy Fan 樊亦敏) with Sing so she can share some of his hardships. Deeply hurt by his last love, Sing is unwilling to start a new relationship.

One day, a traffic accident brings Sing together with the leader of the wealthy Yiu family, Yiu Ngai Yan (Louisa So). Yan admires Sing and hires him as her own personal chauffeur. However, Yan’s high position within her company is sought by many and she is constantly under surveillance. She only has her younger cousin, Yiu Chi Hau (Tony Hung 洪永城) to rely on. Unfortunately, Hau is extremely naïve and lacks good judgment. His confusing relationship with his colleague Mui Man Kwan (Natalie Tong 唐詩詠) is also headache-inducing.

Yan eventually mistakes Sing to be a man who only cares about money and believes he was bribed. She tells him to resign from his position within seven days. To her surprise, Sing helps Yan escape from a dead end during this time, and the two develop an ambiguous relationship. They share feelings for each other, but due to their different backgrounds and social status, a fairytale ending seems impossible.