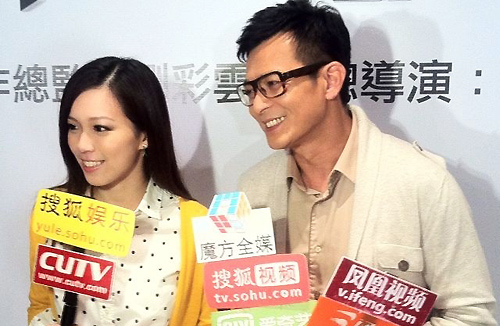 Above: Felix Wong and his daughter, Adrian Wong, star in CTI’s new drama.

Filming and production started in September. The entire cast was present at the press conference to introduce their characters, and to showcase their dashing costumes. CTI Chairman, Ricky Wong (王維基); Managing Director, To Wai Bing (杜惠冰); Creative Producer, Lau Choi Wan (劉彩雲); and Head Director, Lau Shun On (劉順安) appeared in the toasting ceremony to wish for a smooth filming process.

The Open Brain of Watch and Exploration revolves around the main character, Hung Gei Yuen (Felix Wong), an Inspector of the Organized Crime and Triad Bureau (OCTB). After being traumatized by the murder of his son, he discovered that he has a special mind-reading ability and the skill to enter other people’s subconscious. He believes his son was actually murdered through his subconscious. His newfound ability also causes him to start displaying signs of a split personality; even his wife and friends begin to think he is suffering from a mental illness. However, with his special ability and detective experience, he helps the police to solve many supernatural cases, and he hopes to eventually track down his son’s killer.

The main characters in the drama will each possess a type of “special ability” and together they will use their powers to solve many mysterious cases.