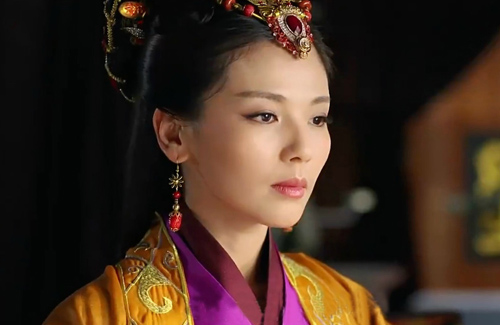 Since its premiere, new period drama Legend of Mi Yue <羋月傳> has received a very positive response. The drama’s storyline, which depicts the intense rivalry between two half-sisters, respectively played by Tamia Liu (劉濤) and Betty Sun (孫儷), has been a topic of fervent discussion on Internet forums. Tamia’s character, Mi Zhu, is particularly fascinating as she transforms from a sweet and innocent ingenue into someone who resorts to ruthless methods in order to gain power.

On playing one of the biggest villainess in the drama, Tamia concurred that this was one of the most dramatic roles she had played in her career history, “Mi Zhu eventually becomes psychotic to the point of perversion. The directors were a little concerned about whether I can portray that. They were quite worried about this.” Tamia added that she was confident playing such an intense character, “Although I have never performed [in this type of role before], it doesn’t mean that I don’t have the ability to do so.”

As the portrayal of Mi Zhu involves playing both her younger self and her older, more jaded self, there is an additional layer of difficulty to the portrayal of the character. Tamia remained unfazed, as she spoke about how much she enjoyed Mi Zhu’s sexier image upon her transformation into a villainess, “When a female character is villainous, the eye makeup will be thicker. There is a lot of room for expression, and playing the role was very enjoyable.”

Mi Zhu has many crying scenes, which prompted Tamia to occasionally rehearse the crying scenes at home. Her husband and children would sometimes watch her and remark that she was becoming obsessed with portraying the character.