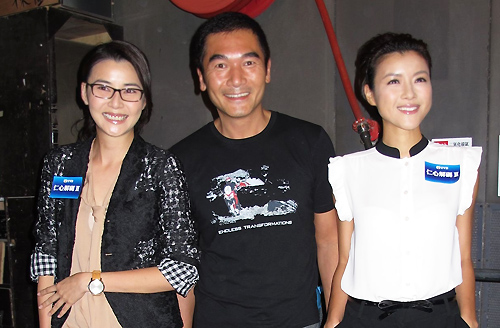 Currently rumored to be dating Him Law (羅仲謙), Tavia Yeung was bombarded with questions regarding Him’s mother, who allegedly shares a striking resemblance to Tavia’s facial features. Tavia defended Him’s mother, “Mommy Law is very pretty and young! We don’t look alike at all! I will not ask about his family, and I hope [the press] will not either!”

Five years his senior, many netizens saw 32-year-old Tavia Yeung and 27-year-old Him Law’s romance to be an odd-couple pairing. Tavia felt that such discrimination should not be tolerated in love, as happiness is what matters the most in a relationship.

Tavia’s costar in A Great Way to Care 2, Alex Fong, joked that Tavia only has eyes for young and muscular men. Tavia immediately pinched Alex’s chest as a punishment.

Since the popular broadcasts of Tiger Cubs <飛虎> and Ghetto Justice 2 <怒火街頭2>, Christine Kuo (苟芸慧) has picked up numerous romantic rumors with her costars. Tabloids claimed that she has lost interest in her Ghetto Justice 2 costar, Kevin Cheng (鄭嘉穎), and is reportedly aiming for the affections of her A Great Way to Care 2 costar, Edwin Siu.

Christine immediately denied the claims, “Those who have worked with me before know how I am. I don’t want to explain too much. I’ve only started working with [Edwin] two days ago! I don’t know how these rumors started.” She added that she is currently focusing on work, and will consider dating again once her career is steady.

Edwin Siu also said, “It’s just a report for laughs. I don’t think I need to give an explanation. I’m not very familiar with Christine yet. Our friendship isn’t to the point where I will take her home.” When asked if he was “electrified” by Christine’s charms, Edwin responded, “Yes… in the drama!”