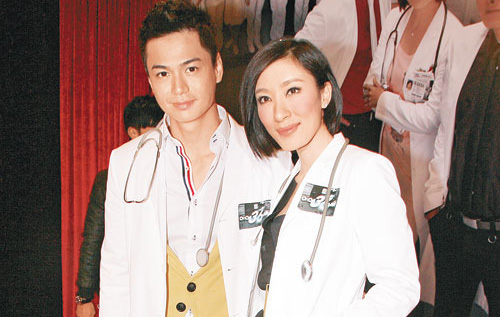 TVB artists, Tavia Yang (楊怡), Kenneth Ma (馬國明), Him Law (羅仲謙), and Mandy Wong (黃智雯) promoted their new drama, The Hippocratic Crush <On Call 36小時>, which will be airing on Monday, February 13, 2012 in Hong Kong. Despite Tavia Yang and Him Law’s dating rumors continuing to spread after they were spotted on a Halloween barbecue date, the pair were not evasive at the promotional event, even joking and smiling together. Aside from stating that she welcomed Him Law asking her out on Valentine’s Day, Tavia hinted that she was happy to receive a ring from Him as well! Would Him Law know what to do?

Speaking with reporters, Tavia stated, “On Valentine’s Day, I need to work. If he truly wants to ask me out, then he needs to pre-arrange the time!” Tavia noted that women should wait [for men] to give them gifts. Asked whether she would accept a ring, Tavia replied, “Of course, it’s money!” Appearing in good spirits, Tavia appeared to hint that her relationship with Him Law may have improved, “If I were to come across a good man, I will date. We are good friends.” (Has your relationship improved?) “There is no time! I have to work everyday!” Tavia admitted that she met Him for meal outings privately.

Although Him was not as open in discussing his romantic rumors involving Tavia, he was quite protective when asked about her cosmetic surgery rumors. Him noted, “I do not think there was any [cosmetic surgery]! We always saw each other during filming!” Asked if he ever touched Tavia’s nose, Him replied, “No, there were no kissing scenes, so I never touched [her nose]!” In addition, Him also vouched that his ex-girlfriend, Theresa Fu (傅穎), did not receive any plastic surgery procedures either.

With her popularity surging after portraying “Kwan Yi So” in L’Escargot <缺宅男女>, Mandy Wong said with a smile that she will control herself and not allow the unreasonable and dominant traits of Hong Kong women to surface.  “Otherwise, it will scare away male friends!” Jayne: Could it really be true that Tavia and Him Law are dating? They appear to see each other often. Tavia’s statement that she welcomes Him Law asking her out seems quite open-ended, leaving room for development, rather than the standard reply of, “We are friends only.”