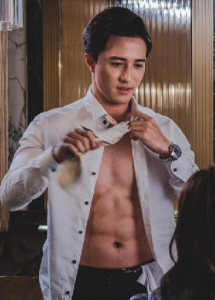 Sharing that Roxanne would often tell jokes on set to perk everyone up, Telford mentioned he had a stress-free time working alongside her and was free to perform. Joining TVB as a sports host in 2016, he quickly gained hosting and later acting opportunities, but the leading man role still came as a surprise.

“During the casting call I knew that there’d be topless and emotional scenes, both Lucas Yiu (姚宏遠) and I’d have topless scenes so I got started on my training, one day the producer asked me how my preparations were coming along, then said that I was going to be the male lead, I was really stunned right then!”

On why Telford was chosen for the meaty role in the twelve-episode series, producer Kuan Shu Ming (關樹明) said, “I worked with (Telford) in Wife Interrupted <救妻同學會> and The Line Watchers <把關者們>, he is a very hardworking actor and also suitable for the lead role of OPM. His character is rather challenging as an undergraduate researcher who starts off getting cheated, to later being the one to cheat others; the 12-episode series is a chance for Telford, Lucas and the other new generation of actors to try out important roles, plus they’d have other experienced actors like Roxanne and Ram Chiang (蔣志光) to keep a watch, I feel we should let them have a chance!”

In real life, the 34-year-old spills that he is rather conservative and would only deposit his money in the bank rather than invest. Explaining that he needs to have money on hand to feel secure, Telford calls himself a foodie, and admits to spending more on food. Though he is already in the habit of working out at the gym, he took to controlling his oil and sodium intake, and even abstained from rice, bring his own meals comprising egg white and braised chicken to set, to look his best on screen.

After finishing the first two topless takes, he eagerly asked the director if all the scenes have been completed, but the latter could only reply that there was still “one remaining scene” and could not provide the exact timing for the shoot!

Keen to Explore Action Roles
Having hosted a variety of programs, Telford also hopes to diversify his acting portfolio by trying out more psychologically complex roles next, and is also keen on the action drama genre. “I’ve done fighting scenes, but was the one to get punched. I’d also like to know what it feels like to retaliate!” he said with a laugh.