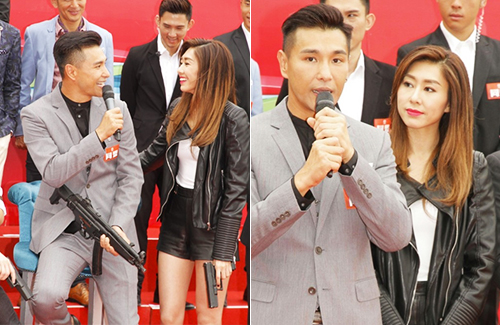 The Hong Kong media has been head over heels at the possibility that Ruco Chan (陳展鵬) and Nancy Wu (胡定欣) could be a couple, having that their rumored relationship was all that was reported when the cast and crew of TVB’s The Alliance <同盟> held its blessing ceremony on Thursday, September 29. Even their costars seem to be on board the “NanCo” ship. “They are compatible!” said Paw Hee-ching (鮑起靜), who stars in The Alliance as Ruco’s mother. The Alliance is also Paw Hee-ching’s first TVB drama. “He’s a handsome man and she’s a beautiful woman! But this is just for promotion, right?”

According to rumors, Ruco and Nancy took their relationship offscreen after collaborating in this year’s hit drama A Fist Within Four Walls <城寨英雄>. Ruco was said to have pursued Nancy in an “old-fashioned, ancient” way, and took her to a concert. The two were spotted on a concert date a few weeks ago, watching Sammi Cheng’s (鄭秀文) live show at the Hong Kong Coliseum.

Upon hearing their dating rumor, The Alliance producer Jazz Boon (文偉鴻) jokingly asked Ruco, “Can you describe to us what kind of ancient methods you used?” Ruco said with a laugh, “I’ve only heard of ancient Chinese medicine.”

In a later interview, Ruco denied dating Nancy, but is thankful for the rumor, as it helps contribute to the promotion of their new drama. Asking if the dating rumors have affected his friendship with Nancy, Ruco said, “Not at all. It’s not like this hasn’t happened to me before. I am actually more happy at the fact that the influence of A Fist Within Four Walls has carried on to The Alliance. Everyone thinks we look compatible as a pair!”

According to their dating rumor, Ruco has been avoiding Nancy on set and acted distant, so they would not attract unwanted attention. Ruco explained, “I’m sure a lot of you know this by now. When I am in deep thought I tend to isolate myself. That is what happens when I’m working. My relationship with Nancy is fine!”

Not much is known about the story of The Alliance. Jazz Boon has kept the creative production under tight wraps. What is known, however, is that Jazz has called back A Fist Within Four Walls action choreographer Philip Kwok (郭追) to be the drama’s choreographer, and that the show will feature elements of Brazilian jiu-jitsu, Krav Maga, gun fu, and more. Paw Hee-ching will portray a character that is inspired by the female emperor, Wu Zetian. Ruco portrays Paw Hee-ching’s son, raised in Taiwan, who returns to Hong Kong to deal with some family business. During this time, Nancy—perhaps under Paw Hee-ching’s orders—silently protects Ruco from afar.

Already a week into production, Ruco and Nancy said the show is even more action-packed and thrilling than A Fist Within Four Walls. Ruco shared that he will have some intimate scenes with Nancy, revealing, “Some of those intimate scenes include really close contact action sequences, such as doing judo.”

Asking if he’s afraid that he’ll end up touching Nancy inappropriately, Ruco said, “Not at all. We are all professional actors. With this understanding in mind, the outcome of the shot will be even better.”