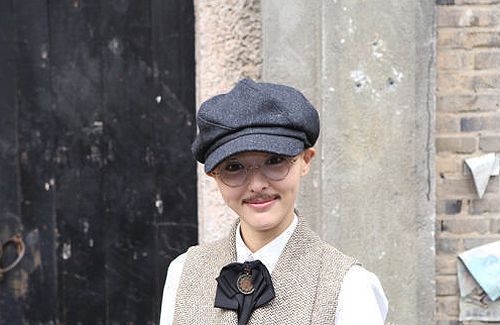 As a good friend of Yang Mi (楊冪), Tiffany Tang (唐嫣) admitted that she feels a little conflicted about filming romantic scenes with Yang Mi’s husband, Hawick Lau (劉愷威), with whom Tiffany is collaborating in the upcoming television drama, Lady and the Liar <千金女賊>.

The first time Tiffany officially met Hawick was about two months ago, when she filmed her guest appearance for Across Heaven and Earth <風雲天地>. However, she shared that it felt like they were already very familiar with one another, because she had heard Yang Mi talk so much about him. Moreover, Hawick was very courteous toward her and treated her like a brother would a sister.

Lady and the Liar will be Tiffany and Hawick’s second time working together, though it will be the first time they play a couple. In a recent interview, Tiffany revealed that Yang Mi had given them the okay for their romantic scenes and had told her, “Just perform well.”

“But in my heart, I’ll still feel a little conflicted,” Tiffany said, “so I do my best to make sure we do fake kisses as much as possible.”

Although Tiffany seems to have recovered from her messy breakup earlier this year, the media has begun pestering her about her future plans now that Yang Mi and Cecilia Liu (劉詩詩), another actress friend, are in happy relationships. “In interviews, I’ll always be asked, ‘Have you noticed that many of your close friends are taken?’” Tiffany said. “Let me laugh at that for a bit – how could I not have noticed, since you are always reminding me?”

Tiffany shared that Yang Mi and Hawick actively introduce her to their friends, hoping to strike up a match, but that she herself is not fond of one-on-one blind dates, instead preferring large group gatherings.

However, Tiffany added that is learning to widen her range of choices, since she thinks she may have set too many limits before. Her main requirements are that her partner be loyal and filial, and that he treat her well. Age is also a factor: “If he is 20 years older than me, then definitely not. If he is 15 years older, I may not be able to accept it!”