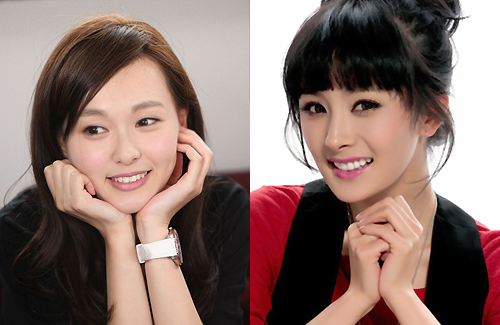 Above: Tiffany Tang is best friends with Yang Mi.

When mainland China’s New Four Young Fadan Actresses of the television industry, Stephy Qi (戚薇), Tiffany Tang (唐嫣), Yang Mi (杨幂), and Cecilia Liu (刘诗诗), came together to present the Top Ten Best Dramas of the Year at the 2011 Anhui TV Drama Awards, the mainland Chinese press gushed that it was the industry’s best onscreen moment of the year. The four successful actresses came together again to present the same award a year later, and once again became the center of the media’s attention.

“We are standing in the same positions as last year!” cried Yang Mi as they arrived to the stage of the 2012 Anhui TV Drama Awards. Stephy, known as the leader of the four concubines, stood on the far left. She was followed by Tiffany, Yang Mi, and finally, Cecilia.

“We presented this award last year. This year, we are presenting the same award. I think the Anhui TV Drama Awards should hire us to present this award in the future from now on!” Stephy joked.

Tiffany “Quite Nervous” For Being Part of the Big Four

At the 2012 Anhui TV Drama Awards, which were held on December 14, Tiffany won “Most Popular Actress on the Internet” for  her performance in My Daughter <夏家三千金> and Waking Love Up <爱情睡醒了>. The humble and modest Tiffany expressed that she is “quite nervous” for being labeled as one of the big four actresses, and exclaimed that she still has a lot left to accomplish.

“I know that a label is just a label,” Tiffany said. “No matter what, I still have to walk on. I will not be able to keep holding onto this label forever. There will always be new fadan actresses every year.”

Of the big four, Yang Mi has been the most productive in the past year, filming many movies at once. Cecilia also recently won the “Most Popular Artist” award at the Shanghai TV Festival, and has dabbled in the film industry. Tiffany revealed that she too wants to try out film roles in the future, and said, “Being able to perform in the big screen is a dream of mine. Every actor would love for a chance to be able to perform on a suitable platform for their talents to shine. But I will never give up the television industry!”

Although she is good friends with all three of the fadan actresses, Tiffany said that she is actually closest to Yang Mi.

Hours before the 2012 Anhui TV Drama Awards were to begin, Tiffany’s fans asked her if she would be spending the night with Yang Mi. Tiffany replied, “We will definitely be sitting together!” Minutes later, the post had almost 1,000 reposts.

Although the “Mitang Couple” are very close friends, big events and ceremonies are the only times the two actresses can get together due to their busy schedules. “But we will always chat with each other through out Weibos,” they exclaimed.

The media often popularizes the entertainment industry for being cruel and heartless, and that true friendship would never exist. Although Stephy, Tiffany, Yang Mi, and Cecilia claim to be good friends, colleagues, and opponents, do they have at least a tint of jealousy for each other? “No. Seeing my friends improve day by day is the most precious thing,” insisted Tiffany.

“Yang Mi and I are really good friends. Yang Mi is very cautious, while I am more like her sidekick!” Tiffany joked. “Having a close friend in the industry is your wealth. There are many people who say they don’t have true friends in the industry. I object to this statement.”

20 comments to Tiffany Tang Gushes Over Friendship With Yang Mi