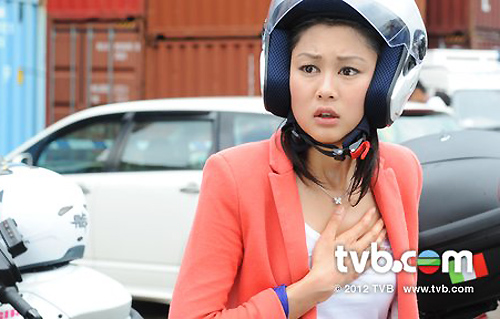 Eliza had a cameo role in Ghetto Justice 2 <怒火街頭2> and was cast as Chin Ka Lok’s (錢嘉樂) love interest in Divas in Distress. Hailing from Vancouver, Eliza struggled with reading the Chinese script and has not received any formal acting training. Fortunately, she learned valuable pointers from veterans Liza Wang (汪明荃) and Gigi Wong (黃淑儀). “Both veterans are very willing to teach newcomers. One time, Liza Jeh showed me how to act a scolding scene. Days later, she asked me how the scene went; I was very moved.”

In last night’s episode, Eliza had a shower scene which revealed her bare back. In addition, she wore sailor and nurse outfits in a fantasy sequence, which excited male interest. Regarding the recent attention lavished upon her, especially over her tight white t-shirt appearance, Eliza said, “It was not intentional to wear a white t-shirt while drenched in water. While filming earlier, we skipped ahead to film the scene.  I felt a bit embarrassed during filming. The wardrobe is arranged by TVB staff and I do not feel that it was especially sexy.” Eliza added, “While filming, I did not feel that my figure was that pronounced. I think it is a matter of camera angles. I do not know how to read Chinese, but I am happy beyond words after learning of netizens’ praises. Whether netizens like or dislike me, I will accept it. Their opinions can help me improve. The most important thing is to improve my Cantonese right now. I truly love acting!”

Asked if the number of her male fans has increased significantly, Eliza said, “Perhaps, I did not pay close attention. Many people said this to me. Thanks!”

TVB was crowded with upcoming actresses who have signed with the company after competing in beauty pageants. Facing competitors such as Christine Kuo (苟芸慧), Oceane Zhu (朱璇), and Leanne Li (李亞男), Eliza was asked how she thought of distinguishing herself. Eliza replied, “I do not want to be compared to others. I will only compare to my own performances from my last drama and how I acted last month. I am happy as long as I have improved. It is most important to enjoy the process.”