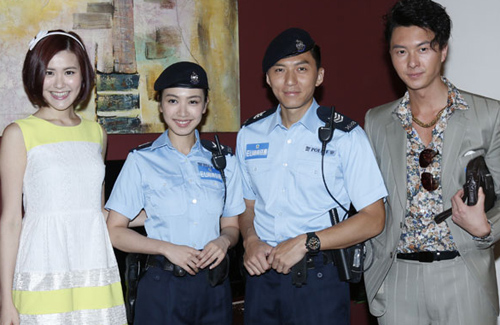 A blessing ceremony was held for TVB’s new drama EU: Overtime Mission <EU超時任務>, a series about a band of unlikely modern heroes who use their time-traveling abilities to complete missions and solve cases.

EU: Overtime Mission is Tracy’s first drama as a lead actress. The 26-year-old actress has previously appeared in The Hippocratic Crush 2 <On Call 36小時II>, Tomorrow Is Another Day <再戰明天>, and is currently appearing in the comedy drama Smooth Talker <以和為貴>.

In her first role as a police officer, Tracy said she often films on the streets with an emergency unit car. She finds her appearance very cool, and shared that she often gets mistaken by people as a real police officer.

“This happened last night in Yuen Long. I was sitting inside the vehicle and a woman knocked on the window, asking me to save her drunk husband. I told her to call 999.”

Vincent portrays a village chief, and he possesses a domineering image resembling a mafia leader. “Because of my appearance, not many people want to look at me. But that does give me a sense of accomplishment.”