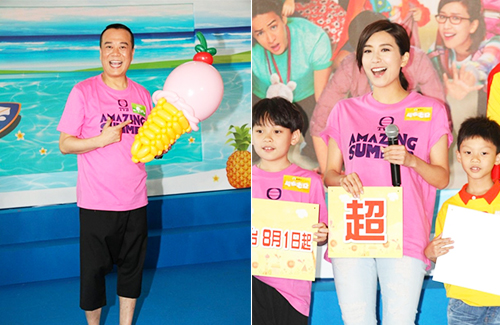 With summer break drawing nearer and nearer, TVB is ready and set to unveil their upcoming television programs for the TVB Amazing Summer lineup.

The first in the summer lineup will be the supernatural comedy House of Spirits <一屋老友記>, starring Bobby Au-yeung and Nancy Wu. The comedy about a human befriending a houseful of ghosts will premiere on June 27th, succeeding the time slot of Nirvana in Fire <琅琊榜>.

Following House of Spirits will be Daddy Dearest <超能老豆> starring Johnson Lee and Mandy Wong. The premiere date for the family drama was pushed back several times before TVB finally decided to make it part of Amazing Summer. Daddy Dearest premieres August 1st.

On the variety side of the lineup, TVB’s The Voice <超級巨聲> singers Alfred Hui (許廷鏗) and Hubert Wu (胡鴻鈞) will be hosting Summer Stars Gone Wild 2 <反斗紅星冇暑假>. It will be premiering on June 27th. Magician Louis Yan (甄澤權) will be back to host the fourth installment of his street magic show, Street Sorcerers <街頭魔法王之魔王之王>, premiering on July 18th. Eric Tsang (曾志偉) will also be back to host a star-studded game show for TVB, I Love Hong Kong <我愛香港>, premiering in mid August.