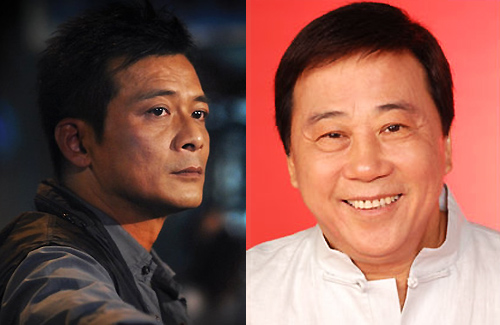 In a bid to compete with TVB and ATV last year, Ricky Wong’s (王維基)  HKTV started a fierce bid to draw television artists from the two stations. Felix Wong (黃日華), Paul Chun (秦沛), Wilson Tsui (艾威), and Ha Yu (夏雨) eventually filmed for HKTV. However, the issuing of the government’s free-to-air licenses has been delayed, causing many TVB’s former artists to regret their decisions. Though TVB claimed to welcome its former artists back, there was also rumor of an internal black list.

After applying for the free-to-air license in 2009, Ricky has been aggressively poaching artists and production crew from TVB and ATV with higher salaries. Although the government has yet to approve the license, HKTV has been actively filming series after series. Besides releasing a list of upcoming dramas, the station has also shown several engaging trailers online.

Although filming for HKTV allowed artists to earn higher filming fees, the delayed broadcast of their dramas caused their exposure and popularity levels to drop. This lowered their chances of earning more money through endorsement deals or attending of events. Come October, several HKTV artists’ annual contracts will expire. Word has it that some are already seeking alternative career options.

TVB Deputy Director of External Affairs, Tsang Sing Ming (曾醒明) said, “As expressed by the senior executives earlier, our doors always welcome artists who want to come home.” There were artists who left TVB for higher pay, who may be admitted back to the station.

However, there was also another group who went over to HKTV due to TVB’s unjust treatment and unscrupulous handling of its employees. This group includes experienced actors such as Felix Wong, Wilson Tsui, Ha Yu and Lo Hoi Pang (盧海鵬), who are allegedly on TVB’s internal black list.

During the airing of Gun Metal Grey <刑警> in 2010, Felix Wong was upset at TVB for neglecting to promote the series and the station’s preferential treatment towards certain projects. He alluded to the station as “Totally Very Bad” and pointed to TVB’s long filming hours. When he had contracted hepatitis, TVB only gave him 18 days of rest. In his old contract, TVB only offered a $500 HKD annual raise for five years.

Recalling his strenuous filming schedule, Lo Hoi Pang cursed angrily, “[My health] will ultimately go bad because of work! I’m getting old. When I joined [TVB], they said everything is okay. It’s bad to always wait around; sometimes you wait until the end and there is still [no work]. My cells are dying every day. Do I die like this? It’s so tiring, [expletive]!”

Ha Yu said, “A taxi driver will earn even more money than new artists. Many people earn several tens of thousands of dollars [HKD] when filming in mainland China, making me want to leave too…. TVB is harsh and stingy towards its workers. My perspective changed after Ricky Wong applied for a broadcasting license.”

Paul Chun, who had accused TVB for being petty and coldly treating his son, Benji Chiang (姜文杰), is also included in the list.

Wilson Tsui, who once admonished TVB’s General Manager Mark Lee (李寶安) for coming up with unreasonable contract conditions, said yesterday, “That time I spoke against the old boss. TVB now has a new boss. I’m actually very free and can help TVB. They can look for me anytime. No one will be happy if they are blacklisted, regardless of company, organization or party.”

Seventy-six-year-old Yue Mo Lin (余慕蓮) is best known in TVB dramas as the trash-collecting old lady. Displeased, she went over to HKTV with the hope that she is able to take on meatier roles. Although she has more substantial roles in HKTV, the fact that everything is in a standstill has since caused her to yearn to go back to TVB. “I’m not young. I don’t want to sign long contracts. I want to give myself more freedom. I am fine with whichever company, as long as they let me act. I really want to play a pretty lady.”

Earlier, while filming a fighting scene opposite Kara Hui (惠英紅) in HKTV’s My Mother is Black Rose <我阿媽係黑玫瑰>, Ding Chu Wai (丁主惠) injured herself, causing a strain in her back muscles, requiring her to wear a neck brace for a long time. Visibly unhappy about this, she said said, “Because of this experience, it’s better to go back. TVB had treated me well. My going over had been accidental. I hope they will give me another chance.” When asked to compare the two companies, Chu Wai said, “I never had any accident at TVB so it’s difficult to compare, but I had been content during my time at TVB.”

Another former TVB actress, Chan On Ying (陳安瑩) is not surprised that there are artists who wish to go back to TVB, although conditions have not changed at HKTV. On Ying, whose contract with HKTV will end next year, added, “I don’t know (about the black list). I am the first batch of artists who left TVB so I don’t know if they will ask me back. I’ll see how things go with the others when my contract ends. Anyway, I’m happy where I am now.”