TVB’s new drama Our Unwinding Ethos <十二傳說> starring Edwin Siu (蕭正楠), and Rosina Lin (林夏薇) was meant to be broadcast in August, but was pushed back because of the playing of Mainland Chinese drama Story of Yanxi Palace <延禧攻略>. However, Our Unwinding Ethos will have to wait again because the original 12 two-hour episode series will be edited into 25 one-hour episodes to fit their Monday to Friday broadcasting time. So the drama won’t air until 2019.

In an interview with the producer of Our Unwinding Ethos, reporters asked if the editing of the series would affect the overall production. Producer Wong Wai Sing (黃偉聲) answered “It’s okay, though we anticipated only 12 episodes because it was meant to be 12 units. All the characters and plot lines intertwine, so there shouldn’t be too much of an effect. Besides, putting our show in prime-time is a good thing!” 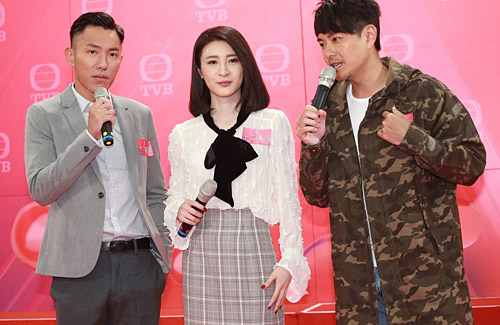 Then what will be playing on Sundays after Story of Yanxi Palace finishes? TVB disclosed that they will be playing a series of films before releasing their youthful drama Wife Interrupted <救妻同學會> in November starring Moon Lau (劉佩玥) and Hubert Wu (胡鴻鈞). Although the drama is still in the middle of filming and won’t wrap up until the end of October, the producer said, “It’s a bit of a rush, but all the staff in TVB are accommodating and hardworking to get the work done.”