A 3-hour film told in four episodes, PTU 2019 is produced by Jacky Lee (李志倫), who worked in collaboration with the Hong Kong Police Force to tell a story centered on the Police Tactical Unit, the police force’s disaster response and riot control unit. Nearly 100 real Hong Kong police officers were mobilized for the filming of PTU 2019. 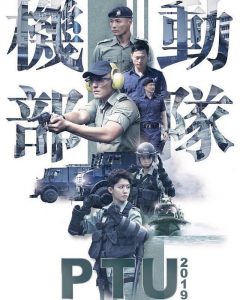 Jacky Lee shared that the cases being covered in the miniseries is based on real life events. He said, “Prior to filming this series, we had many long meetings with the PPRB (Police Public Relations Branch) to talk about the cases that many police officers would encounter in real life. Our consensus is that we must present these stories to the audience as realistic as possible. Like everyone else, policemen and women are normal human beings. They have their own lives and their own relationships. PTU 2019 focuses on the inner turmoil and emotions of these police officers. It is meant to be a show about humanity.”

PTU 2019 spent four months in pre-production, in which a large portion of it was researching into real-life events. “The police force were available to support us through this process,” said the producer. We were given more freedom on what we could include in our stories.”

Police-themed dramas and films are not new to the Hong Kong audiences. To set it apart from its predecessors, Jacky Lee had to be creative. “Many of the uniforms and props used in the film were provided by the police force. We also hired real police officers to appear on and consult for the show. From their daily lives, to how they work on their cases, to even how they talk, it’s all real.”

Originally titled Police Story 2019 <警察故事2019>, which the producer said would have been a more suitable name for the show, he had to change the name to PTU 2019 so audiences would not confuse it with the Jackie Chan (成龍) film series Police Story.

PTU 2019 will have a sequel—EU 2019 <衝鋒隊2019>—which will soon begin production. EU 2019 will center on the officers working for the police force’s Emergency Unit.