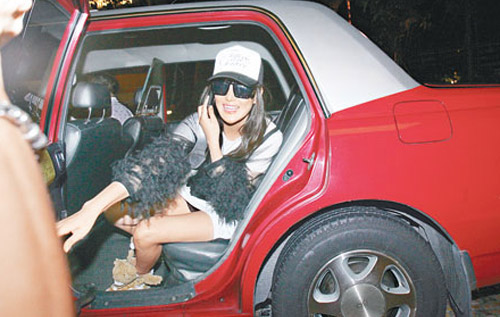 Mainland star, Viann Zhang (張馨予) who has a nickname of “Little Cecilia Cheung (張栢芝)” has been dating Ron Ng (吳卓羲). Their relationship has been gradually seeing light in recent days. Viann recently arrived in Hong Kong to promote her movie and besides donning a black and white couple cap similar to boyfriend Ron Ng, Viann also did not take caution to avoid suspicion and continuously stepped into her boyfriend’s Ho Man Tin apartment district two nights in a row.

Following the night before yesterday, after completing her work yesterday, Viann immediately rushed back to the hotel for a quick refreshment and came out wearing a tight mini-skirt that showed off her long legs. Viann hurriedly boarded a cab to leave the hotel but in her anxiety to meet her lover, she accidentally revealed her black safety shorts beneath her skirt.

The taxi then drove to Ho Man Tin district and after getting down, Viann sneakily switched to another seven-seater car. It was estimated that Viann had plans to shake off the paparazzi before secretly meeting Ron. However, in the end, her plan was eventually foiled by the reporters and a helpless Viann had no choice but to escape to the nearby buildings to avoid them.

In other news, Viann Zhang who has always viewed Cecilia Cheung as her idol, finally got a chance to collaborate with Cecilia on the new movie, The Lion Roars Again <河東獅吼Ⅱ> thus making the netizens do a comparison of her’s and Cecilia’s figures and looks in recent days.

Ah K: What do you guys think? Does Viann Zhang deserves the nickname of “Little Cecilia Cheung”? Does she resemble Cecilia in any way? I personally feel that Viann does have Cecilia’s eyes and nose (after surgery). Give me your opinions k, would love to read what you guys think!

And I don’t see what’s wrong with Viann accidentally revealing her safety shorts, she didn’t do it on purpose and it’s not like she did a Britney Spears by exposing her crotch or something. It’s more of a case of protecting modesty than revealing modesty.