Al Cappuccino follows William (Vincent Wong), an actor and thespian nerd who was once part of an Ohio theatre troupe. He decides to move back to Hong Kong permanently for better acting pursuits, but is caught up in a deal with Inspector Rachel Koo (Crystal Fung 馮盈盈), who offers him one very lucrative acting job: to be the leader of a triad. William agrees to be a police informant and takes up the identity of the long-lost male successor of an assassinated triad leader. 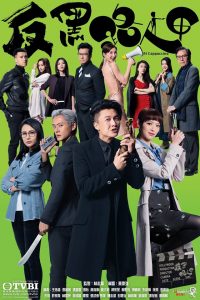 This mildly disrupts the plans of Bun (Owen Cheung), an undercover police officer who has already infiltrated the gang successfully. Bun grudgingly agrees to support William to become the leader. Despite his initial dislike for William, Bun eventually grows protective of him, and the two form a tight bond.

A single murder case disrupts all plans however, and the underworld is thrown into chaos. It turns out that acting as the boss versus being the boss are two completely different things.

Al Cappuccino is a comedy in format. The show knows nostalgia well, and pays homage to many classic Hong Kong films in its dialogue. With the combination of a promising script and convincing chemistry between Vincent and Owen, Al Cappuccino is expected to be Hong Kong’s next big drama hit.