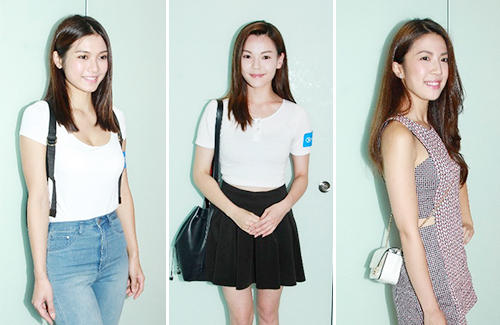 On June 10, TVB’s rival station ViuTV held its first round interviews for their upcoming beauty pageant reality show, The Queen of D.n.A <美選D.n.A>. The show, which was described to be a beauty pageant with a twist, aims to redefine beauty and uses the format of a reality show to document the pageant process. Though there are no age limits, contestants must be at least 16 years old, single, and a permanent resident of Hong Kong.

The press were captivated by quite a few of the applicants, notably the 24-year-old model Charlotte Cheung, 22-year-old Hang Seng Management College student alumna Natalie Fong, and 23-year-old model Yoshi.

Charlotte showed up at the interviews wearing a simple white tee and jeans. She expressed that she has had experience in the industry, and once starred in a music video for the MK-pop boy group, BOP (天堂鳥). She said, “My friends have always encouraged me to audition for pageants, but the Miss Hong Kong pageant is too stressful for me. [The Queen of D.n.A] is different. There is no restrictions on age or academic backgrounds.”

Natalie, wearing a white shirt and black skirts, said, “I do not have a high academic background and I am not very tall either. That’s why I decided to audition for this pageant.” She added that she does not mind doing the high-risk challenges that comes with reality shows, but she does not want her parents to get involved.

Yoshi said she likes the The Queen of D.n.A’s reality show concept. When speaking about the pageant’s promo video, which urged both “angels” and “devils” to audition, Yoshi said, “I am an angel perhaps. I only have on tattoo, on my foot, but I have a pretty tomboyish personality. Maybe I’m also a devil.” Her boyfriend said he is aware that she is auditioning for a pageant and does not mind appearing on camera for her. TAGS: The Queen of D.n.A, ViuTV

1 comment to ViuTV’s Beauty Pageant “The Queen of D.n.A” Holds First Round Interviews