Ron Ng (吳卓羲) has matured, but he is still not ready to settle down yet. The 41-year-old actor has a long list of requirements he desires in a girlfriend, and cites her ability to accommodate him as a top priority. 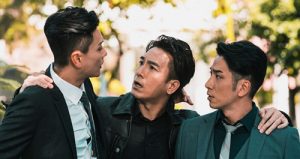 Since Triumph in the Skies <衝上雲霄>, Ron has come a long way, and has grown along with other actors such as Kenneth Ma (馬國明) and Bosco Wong (黃宗澤) who entered the industry at the same time. Viewers were delighted to see the trio star in Flying Tigers 2 <飛虎之雷霆極戰> together earlier, and realized that almost two decades have gone by and how many things have changed. Although Kenneth is now in a steady relationship with Roxanne Tong (湯洛雯), Ron and Bosco are still eligible bachelors.

Requirements in His Girlfriend

Staying single does not bother Ron, who continues to prioritize his career first. “A lot of the time, you don’t get what you want just because you want it. We all make our own choices, and as long as the timing is right, you can move onto the next step. In most cases, the problem is because of work. Sometimes, you just don’t have the time or effort in wanting to communicate or get to know each other. It’s better if you’re just filming in Hong Kong, but when you’re in China for several months, you can’t just rely on video calls or talking on the phone. I’m just waiting for a person who understands my profession.”

His ideal girlfriend should be filial, attentive, caring, and independent. Ron also revealed that he dislikes women who are overly attached. From what he sees while filming, many of his colleagues’ girlfriends would visit the filming set, and he is worried that his future significant other would become upset when he films intimate scenes.

Understanding that he may come across as having too many expectations and even greedy with these desired qualities, Ron laughed, “Finding the right person at the right time is not an easy job. We’ll let fate decide!”

Besides wanting to find a woman who understands the demands of his work, Ron said that his future girlfriend must be able to get along with his family and is willing to take care of his mother while he is away for filming. Currently living with his mother, Ron stressed that he will not leave her behind even after marriage.

Besides occasionally receiving pressure from his family on finding a girlfriend, Ron’s mother is more eager for a grandchild first. In fact, Ron’s elder sister even offered to help him take care of his future child when he is busy. However, understanding how difficult it is to raise a child, Ron wants to concentrate on his career first and find a suitable partner before having children.

Entering the industry when he was only 18 years old, Ron has played a variety of different characters at TVB. Reflecting on his past roles, Ron looks forward to new challenges. He never had a chance to play a character with a physical disability, and hopes to get a chance to play a blind or deaf role so he can use non-verbal cues and actions to express himself in acting.

Though he often stars in crime dramas and action roles, Ron has interests in working in comedies and bringing joy and laughter to viewers. Ron praised Stephen Chow (周星馳) and Nick Cheung (張家輝) for their excellent performances in comedies, and hopes he can also diversify his performances.

Ron Ng Opens Up on Personal Life and Career