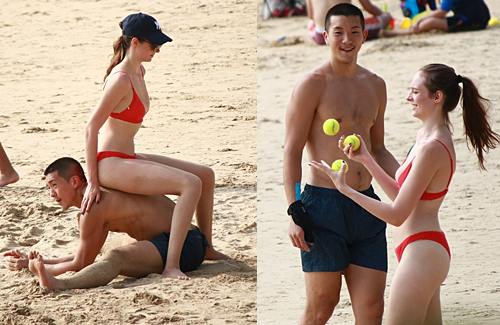 William Chan (陳偉霆) was speculated to be dating Brazilian model Bruna G. Marth last year. Although he did not openly confirm their relationship, angry fans attacked Bruna online and called her a “prostitute” which made her break down into tears. Perhaps due to the intense backlash, William and Bruna’s relationship was short-lived and the model seems to have moved on to a new beau.

Recently, Bruna was spotted behaving intimately with Hong Kong basketball player Adam Xu (徐遠成) at the beach. The couple shares a high-profile relationship and often posts sweet photos together on their social media.

The couple looks physically compatible due to their tall heights, and immediately attracted attention from pedestrians and reporters when they went out together. Photos of them spending a lovely date at the beach were revealed, where they played volleyball and then splashed in the waves. Unfazed by others’ gazes at her cleavage, Bruna laughed each time she bent to pick up the ball. Adam also looked very fit in his shorts.

They played for more than half an hour until Bruna got tired and sat down to rest. Since Adam is an athlete, he immediately got into stretching mode. Bruna helped him out by sitting on his back for a while, and eventually persuaded him to go into the water with her. Not long afterward, Bruna seems to have gotten hurt from the rocks and Adam attentively checked her wounds. 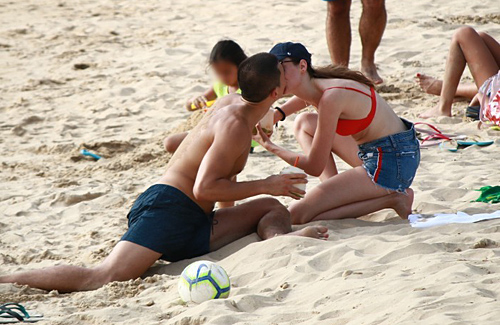