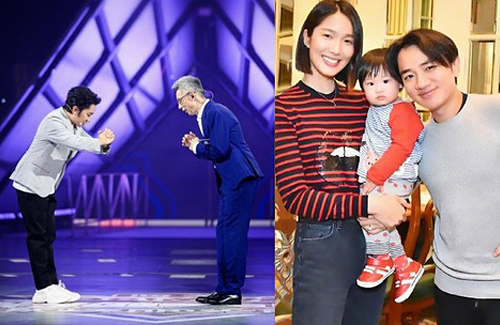 Wong Cho Lam (王祖藍) had a successful career at TVB, but left the station to pursue more opportunities in China in 2015. With his humorous antics, it did not take long before he became a big variety show star in China. Despite his newfound fame, Cho Lam revealed that it was not easy to adjust working in China and shared his experiences in developing his career in a new market.

Working alongside Louis Yuen (阮兆祥) and Johnson Lee (李思捷) in the comedy trio show Fuk Luk Sau (福祿壽), Cho Lam kick-started his career in China, where his antics were well-received by fans because his imitations had no boundaries and they were different from China’s more conservative variety shows.

Recalling his experience when he appeared as a guest for Chinese producer Hong Tao‘s (洪濤) show, Cho Lam was surprised to find a group of high-level executives secretly evaluating his acting skills. Surprised by the careful scrutiny, thankfully Cho Lam impressed the executives but he always thought of a backup plan. If his career in China fails, he could return to TVB.

Difficult to Adjust to a New Market

Although Cho Lam has worked in China for some time, he is not used to the different environment. Every time he is stuck working in China for three or four months, he misses not eating his favorite Hong Kong dishes and cried, “It’s horrible! I would be homesick. It’s not easy to film there.”

Used to Hong Kong’s work culture and doing most of the work himself, Cho Lam felt awkward having a team of assistants serving him. In comparison, his Mainland China’s colleagues are less independent and were shocked that they could walk in public unaccompanied.

Negative Experiences as an Artiste

Though Cho Lam kept many negative emotions to himself throughout his career, he cited a few instances which upset him while working in China. One time, a variety show host mistook Cho Lam for being arrogant because the actor did not get on stage after a long wait, while Cho Lam was merely waiting for instructions. The host rudely asked if Cho Lam wanted to work, but quickly changed his tune with compliments after seeing the audience’s positive response to Cho Lam.

In another instance, Cho Lam was handing out posters to a crowd of fans. One fan enthusiastically called out his admiration for him, but Cho Lam noticed he was grabbing a poster from a young girl and asked him to stop. The fan’s attitude changed and immediately started spurring out profanities. In disbelief by the abrupt change in attitude, Cho Lam said, “A second earlier, the fan was professing his love for me. A second later, he now loves my mom!”

Earlier, Kenneth Ma (馬國明) and Lawrence Ng (吳啟華) revealed that Mainland actresses tried to seduce them into their hotel rooms when they were working in China. When asked if he had such invitations, Cho Lam said that he is not as handsome as Nicholas Tse (謝霆鋒) or William Chan (陳偉霆). He joked that while young women would not show him any interest, the fans’ moms would tell him they love him. With the exception of his wife Leanne Li (李亞男), few women would fall for him based on his talent alone.